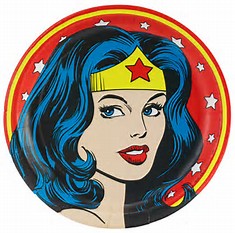 It takes an imaginary hero to solve imaginary problems! Not that repression of women and girls, world-wide, isn’t real. But it’s the height of fantasy to think the United Nations can or will do something about it.

So here’s what they did: “appointed” a cartoon character as Honorary Ambassador for the Empowerment of Women and Girls. No way a cartoon character can threaten the Muslims. This choice shows how serious they are about it. I wonder how close they came to appointing Minnie Mouse.

The Democrat running for attorney general of the state of Kansas–that is, the top law enforcement official in the state–is in hot water over a post she has hanging in her law office. It shows Wonder Woman lassoing a police officer (http://www.kctv5.com/story/38460272/candidates-poster-of-wonder-woman-lassoing-cop-criticized).

Gee, a lot of people think this isn’t quite the ticket for a state attorney general. Even some Democrats think she should drop out of the race. But she says people have “misconstrued” the meaning of the poster. She says she’s “pro-cop.” It should be obvious to everyone that that poster displays only the highest regard for police personnel. If you don’t think so, you must be a Racist.

So is this part of the Big Blue Wave that’s gonna flood the country in November, and sweep the Democrats back into power? “Vote for us! No more law enforcement! No more national borders! No more Climbit Change denial! We’ll finish the job Obama started!”

Yeah. Vote for them and put a stake through the heart of America.

I don’t know how you go about firing a cartoon character, but that’s what the United Nations has done–after first appointing Wonder Woman, who does not exist, a special ambassador for women’s rights. And now she’s sacked ( http://www.breitbart.com/news/wonder-woman-dumped-as-a-special-un-ambassador-after-uproar/ ).

It seems lots and lots of people complained about her appointment. Oh, it didn’t bother them that she’s only a cartoon. They didn’t mind it made the UN look sillier than usual.

Oh, no, Wonder Woman’s white! And she’s not wearing a burqa! And she beats up bad guys, too! Three strikes, she’s out!

Actually, there are real persons who have been fired for being white, or just not hired, for that very reason. But gee whiz, you’d think a cartoon character could get away with it!

Oh, wait, I know! Wonder Woman’s not inclusive. Any role model for girls must be inclusive of those women who don’t have female body parts. You know–the ones that used to be called “men.”

These are the people who are running our culture, running our world… right into the ground.

(Sorry, Wonder Woman: you deserve better than this…)

In keeping with its whole-hearted commitment to idiocy, the United Nations has named a cartoon character, Wonder Woman, Honorary Ambassador for the Empowerment of Women and Girls ( http://www.womenofchina.cn/womenofchina/html1/news/international/1611/2505-1.htm ).

It saddens me to tell you that this is not a satire.

Get this. Wonder Woman, an imaginary character, “will be tasked with raising awareness about Goal 5 of the UN Sustainable Development Goals, which is to advance gender equality and empower all women and girls by 2030.”

What, all of them? And empower them to do what? And how will this square with the United Nations’ equally deep commitment to coddling and sucking up to Islam?

Oh, well, at least Wonder Woman, as a cartoon character, won’t be able to steal anything. For that you need a real woman. Like Hillary Clinton.