Katheleen is a creative young girl in Brazil who asked me for permission to make a Bell Mountain video. I had no idea what to expect, no idea at all–but being surprised would be part of the fun.

Well, I was surprised, all right. And delighted! Yo, Steven Spielberg–there’s more than one way to make a movie!

This one’s in Portuguese; but just press “CC” for English subtitles. 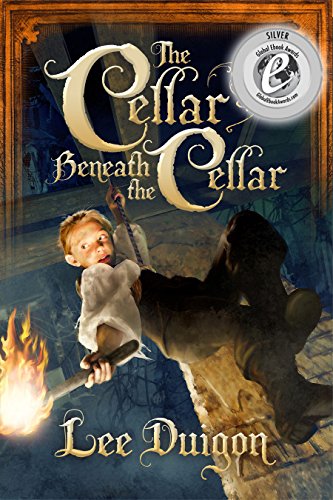 For the benefit of new arrivals at this blog, from time to time I like to introduce my books, now known collectively as the Bell Mountain series. With twelve titles in print–wow.

I won Global E-Book Awards for the first two books in the series. The Cellar Beneath the Cellar, pictured here, shows the skill of artist Kirk DouPonce at its uncanniest: if that girl on the cover isn’t really Ellayne from the book, then something very spooky’s going on here.

There’s somebody walking around out there who’s supposed to live in my book.

Writers are naturally a little thin-skinned about their work. Your book isn’t going to amount to anything if you don’t pour your heart into it.

But to criticize my books for passing on secret Calvinist messages–that’s a bit too much.

“I’m not going to review this book because it contains an opinion other than mine!” All right, fair enough: there are lots of books I won’t review because their messages are obnoxious to me. But secret messages–no. That’s just silly.

The fantasy world of Bell Mountain is inhabited by people who never heard of Protestants or Catholics and have troubles of their own to think about.

Wow! Has it really been seven years since this book came out?

The Cellar Beneath the Cellar is Book No. 2 in my Bell Mountain series; and when I started it, I had no idea of what I was getting into. I thought it was merely the sequel to Bell Mountain–goes to show how much I know!

This comes from O.P. in Australia, originally posted on my “Playground Player” chess forum on http://www.chessgames.com . I have his permission to post it here. I have edited it slightly, only because it’s so long. Here goes:

I’ve finished “The Last Banquet” and found this fourth installment to be a most enjoyable read, just as I did the first three!… You continue to come up with fascinating new characters and the further development of your existing characters from the previous books is ingenious.

The obsession of Lord Reesh with the past Empire is an intriguing sub-theme throughout the series.

I wonder to what extent the old Empire, and its demise, is a commentary on our own society.

Orth is an interesting counter-point.

“Folly, Orth thought. You collect bits of rubbish from the ruins of the Empire and treat it like fine jewels, and you delude yourself. If the men of that age were so great, why is there nothing left of their greatness but useless pieces of trash? Why did they perish? You say they flew through the air, and sailed the seas, and spoke to one another over great distances as if they sat across a table from each other–but did any of that save them? Where are they now, First Prester? Why should we try to emulate a civilization that has utterly died out?”

Orth develops into a compelling character. He is pathetic and cowardly, yet retains a residue of conscience, which only emerges when driven by his fear of “the dark angel” with the slaughter weapon. His reaction to the human sacrifice, in contrast to the cynicism of Lord Reesh, is particularly stark.

Your treatment of the  various animals throughout the series is particularly heart-warming. Cavall is so reliable and the addition of Angel was a nice touch for Helki, who preferred “the company of hawk and hound”…

Wytt’s importance in this book, as in the first three, cannot be overstated. The little hairy fellow becomes more captivating with each book.

“Wytt leaped out of her arms and chattered loudly. He snatched up his little sharp stick and brandished it over his head and started dancing all around…He made a squeaking noise that was Omah-laughter.”

You really do bring him to life with your remarkable writing.

The finale of this book, as with all of them, is very dramatic! Of course I won’t give anything away, but Chillith’s last stand before the Thunder King, “You are delivered into judgment!” was spine-chilling!

There’s more, but O.P. says he’ll post the whole thing on The Last Banquet amazon.com page. There’s a lot of praise here that is very gratifying to me–but I’ve posted this not to blow my own horn, but in hopes that some of you out there, after reading the review, will want to read the book.

Spring is coming; and when it arrives, I want to be ready to start writing my next book, which would be Book #9 in my Bell Mountain series.

One of my ways of getting ready is to immerse myself in the world of Obann by reading, in order, the seven books already in print. Actually, this is very necessary: I find it very easy to forget certain details, and to unwittingly contradict things I said in earlier books. Between books 3 and 4, for instance, I managed to lose 18 Temple staff without a word of explanation. Eighteen of ’em–pffft! It was a job, putting it right, and I don’t want anything like that to happen again. And so I revisit the earlier books and refresh my memory.

How do I say this without sounding like a ninny? I read my own book and said, “Wow!” I know it sounds asinine. But there are subtleties in it that I’m sure I never put there on purpose, not to mention a story whose like I was never able to write before. I mean, even my mother wound up liking this book, and she was just about impossible to impress.

Well, I’m old enough to look at this book and know right well it didn’t come from me: I only wrote down the story that God gave me. Even that, I know, sounds kind of pretentious and self-important; but it’s not meant to be. I just know that the day the Lord stops giving me the story, it dries up: there is no well of inspiration in me for it to draw upon.

Look, folks, the real purpose of this blog is to try to generate interest in my books, in hope of selling some. They’re all good, and the kindle versions are dirt cheap. The paperbacks feature gorgeous covers by Kirk DouPonce, and one of them costs generally less than a ticket to some lousy movie, even if you don’t buy popcorn.

If this blog has entertained you, or gotten you thinking, please give my books a try. You’ll probably like them. And don’t be put off by my saying so. Believe me, very often it’s not much fun for the author to read his own work. In fact, it can be kind of painful, or even embarrassing.

And if you’ve already read them: well, thank you very much, and ;please pardon this long commercial. I promise not to do another one anytime soon.

[This review of the second book in my Bell Mountain series, The Cellar Beneath the
Cellar, is by one of my esteemed colleagues on Chessgames.com, “Optimal Play,” who lives in Australia. I reprint it here with his permission.]

Lee, I have finished reading The Cellar Beneath the Cellar and am pleased to say that I found it to be as interesting and enjoyable as Bell Mountain.

I’m wary about posting any spoilers for those who have not yet read your second book in the series (or for that matter your first), so I’ll try to be circumspect regarding any significant plot details.

Picking up the story immediately following the ringing of King Ozias’ Bell by Jack and Ellayne, the journey of the two young protagonists, rather than coming to an end, instead continues beyond Bell Mountain, except that now, in contrast to climbing the heights of Bell Mountain, they must descend into the depths in the cellar beneath the cellar under the Temple of the old city; thus they go from one physical extreme to the other.

“From King Ozias’ bell to King Ozias’ Temple–it must be right,” Ellayne said. “It’s like an old story, in which all these things fit together in the end. A story about Ozias that began two thousand years ago and isn’t finished yet.”

The aftermath of the ringing of the Bell has echoes of a Pentacostal experience, with language barriers somehow miraculously overcome, a renewed prophetic energy now in evidence, and the fulfillment of Scripture coming to pass.

A common theme running throughout this second book is that of change.

Martis changes from an assassin to a protector.

Obst changes from a hermit to a missionary.

Helki changes from being solitary to being a leader.

The power released by the Bell emanates outward, signalling an end of sorts, though not as the children expected, but also heralding a new beginning.

The changes wrought by the ringing of the Bell empower each of these characters, and others, in their own particular way, although each experience is initially met with apprehension and doubt, and they only gradually learn to embrace their new lives as they begin to trust God and His mysterious ways.

Contrast their positive experiences with that of Lord Reesh and the Temple authorities in Obann, all of whom abhor change and desperately try to stop it, intent on maintaining the status quo at any cost.

The oncoming war with the Heathen maintains a tension throughout and the introduction of new characters such as Ryons and Szugetai, as well as those introduced in the first book, broaden the story further.

Ellayne seems more intuitive than Jack, but also more vulnerable, and perhaps more idealistic. Her thoughts, which are routinely provided throughout the story, often serve to enlighten situations, and even the personality of other characters;.

Jandra the little prophetess and her strange bird are unnerving, but to my mind, the real heroes of the story are the Omah, and of course especially Wytt!

“One day, all Omah everywhere shall dance at the same time.”

The connotations with certain aspects of our own world are intriguing, such as the Empire with our own civilization, the Heathen tribes with the twelve tribes of Israel, and the Temple with institutional corruption and self-serving autocrats. Although I found it best not to try to draw any direct parallels which may not be there.

Other themes which come to mind are that of being on a journey which brings wisdom, courage, faith and a trust in the ever-present God of Surprises.

God’s providence is another constant theme throughout, most notably in saving the town of Ninneburky.

Despite the Bell now lying in pieces, it continues to ring metaphorically, such as “God says he will give this boy the throne of Ozias. We all heard it, as clear as a bell.”

I hope I’ve read your story correctly, but as Martis himself says, “What people think the writings mean can be much more important than what they really mean.”

And I hope I haven’t given away too much.

Thank you, Lee, for giving the world this wonderful story!

Keep up the good work!

Ten stars out of ten!

[All right, all right, I kept the last three lines–why not? It’s praise, but I worked hard to get it. Besides which, I know and you all know that whatever good is in these books, whatever truth, is of God and came from God. I just wrote it down.]