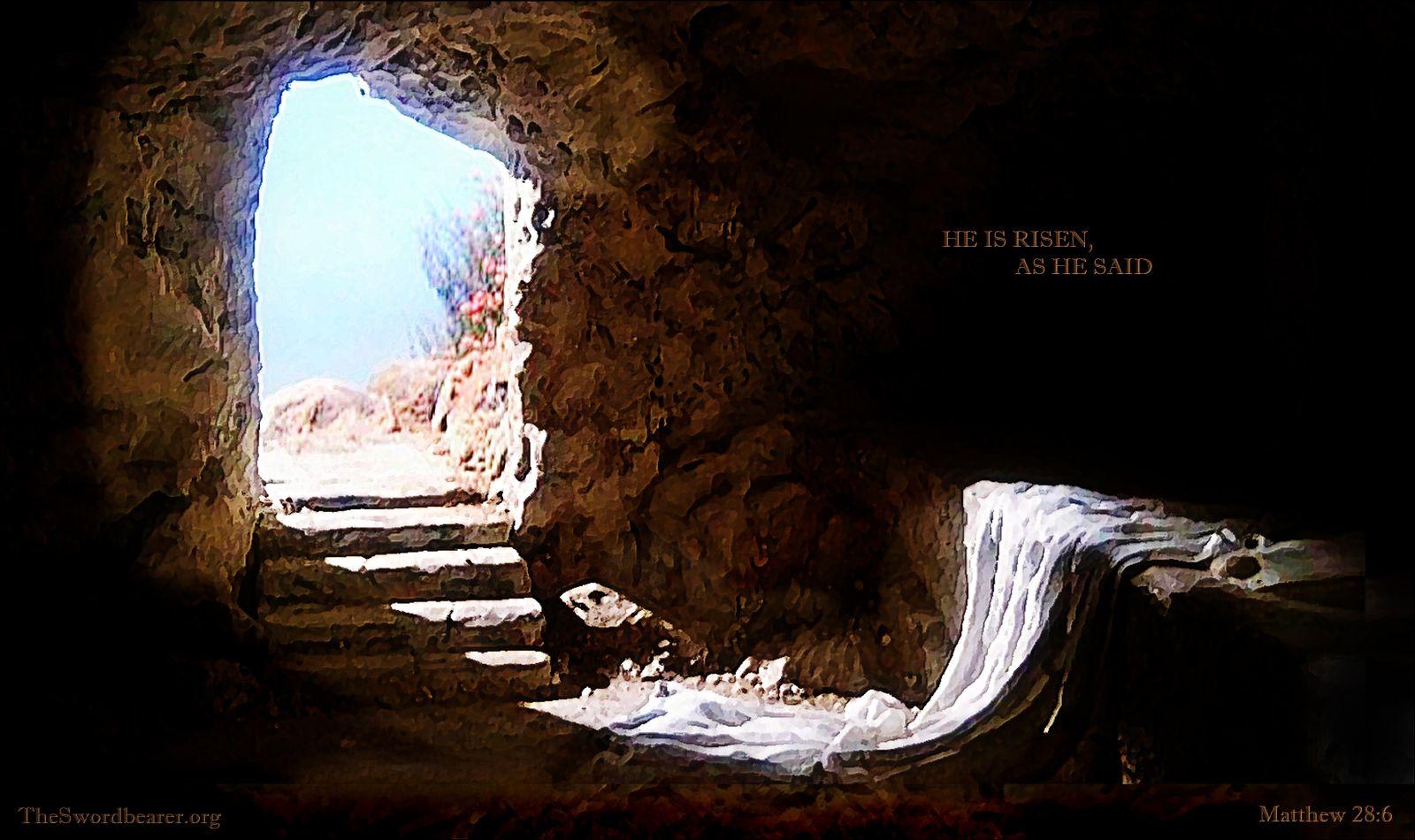 Mark Rushdoony’s essay today, “Our True Citizenship,” reminds us that we have a higher citizenship in Christ’s Kingdom, above and beyond our earthly citizenship in the United States of America.

And if we were good citizens of both, the two would not conflict!

One line stands out: “[N]o matter what men do, the cause of Christ will move forward.”

Can we have an “Amen!” to that? It is, after all, the message of the Resurrection.

Easter’s almost here–and oh! how we need to embrace the Resurrection. Therefore the message of this worship song is simple: “He’s alive!” And that makes all the difference.

He’s Alive, by Don Francisco, tells the story of that Resurrection morning… as experienced by the Apostle Peter. Requested by ElderMike–and we thank him for this.

It’s the first thing in the morning. Your heart is broken. He saw Him tortured and killed.

Now you’re at the tomb.

And He is not there. The stone’s rolled away, the guards are knocked out, and Jesus isn’t there…

Michael W. Smith deserves a curtain call after Awesome God, so here, by poplar demand, he is with Shout to the Lord, accompanied by clips from the film, The Gospel of Matthew.

I could not bear to contemplate the cruel brutality of the Crucifixion if it were not followed, three days later, by the unquenchable glory of the Resurrection. He is risen! Christ Pantocrator, Lord of All: King of Kings and Lord of Lords. Forever. Forever. Forever!

Try to imagine that morning.

The Passover is finished. It’s the day after the Sabbath, very, very early in the morning. Jerusalem is quiet, seeming almost eerily quiet after all the recent uproar.

Mary, from the town of Magdala, has followed Jesus Christ everywhere. She has seen him crucified, taken down, dead, from the cross, and placed in a tomb. She is numb with grief. Almost automatically, she proceeds to the tomb–donated by Joseph of Arimathea–to minister to Jesus’ body. That work could not have been done yesterday, on the Sabbath. There are wounds to wash, spices to apply.The Bible says two other women came with her to do this.

Try to imagine this: the Sanhedrin put a guard at the tomb, claiming they didn’t want Jesus’ followers to steal the body and then claim He was risen. But when Mary and the others arrive, in the grey dawn, the guards are unconscious and the great stone used to seal the tomb has been rolled away.

It must have taken some courage to pass through that dark doorway into the tomb itself. There the women found Jesus’ body gone. An angel, or maybe two angels, appeared and told them, “He is not here.”

The story gets slightly confused–naturally! Matthew reports that the three women, after meeting the risen Christ, ran to tell the good news to His disciples. This is repeated in Mark, with the addition that Mary Magdalene was the first to see Him. Luke reports that the disciples did not believe Mary and the others: “their words seemed to them as idle tales.” Both Luke and John report that Peter went to the sepulcher and found only Jesus’ grave clothes there, no dead body.

After finding their Lord’s tomb empty, somehow Mary became separated from her companions. It’s easy to imagine her wandering about with no clear idea of going anywhere. She has seen an angel, but it doesn’t seem to have registered with her.

She meets a man whom she supposes to be the gardener (for the tomb is in a garden). He has come to work early. He asks her, “Woman, why weepest thou? whom seekest thou?”

Naturally, Mary believes someone pried open the tomb and stole Jesus’ body. These last three days (and Day Three has only just begun) have been too much for her. Although Jesus Himself said all of this would happen, her mind rebels, just as Peter’s did. No! No! None of this was supposed to happen! It’s all wrong!

She begs the gardener to tell her where they’ve put the body.

Then he speaks her name. “Mary.” And her eyes clear, and she sees. This is not the gardener. This is the Son of Man, and He is risen.

Can you imagine her amazement? And her ecstatic joy? She must have been half-crazed with joy and relief, and maybe more than half. Can you blame the disciples for not believing her, when she told them Christ was risen, and that He had spoken to her? How could she even speak coherently?

Of course the accounts in the Bible don’t tally 100%. How could they? The witnesses to these things were beside themselves–first with grief and horror and woe, and then with joy and triumph and astonishment. They saw Jesus tortured and killed. And then they saw Him living–even ate with Him, and touched Him.

But it was Mary from Magdala who was the first of all the human race to experience the birth, as of an explosion which creates a new sun that shines forever, of a new beginning to history. “So when this corruptible shall have put on incorruption, and this mortal shall have put on immortality, then shall be brought to pass the saying that is written, Death is swallowed up in victory. O death, where is thy sting? O grave, where is thy victory? …But thanks be to God, which giveth us the victory through our Lord Jesus Christ.” (I Corinthians 15: 54-57)

Someday each of us shall meet that same gardener; and when He speaks to us, we shall know His voice.