You wouldn’t think I could get into much trouble, reading a Lord Peter Wimsey mystery by Dorothy L. Sayers. The one I’m reading now is Gaudy Night, set at a women’s college in Oxford. It’s important to remember, at all times, that this was published in 1936.

Consider this bit of conversation. One character, opposed to capital punishment, says murderers must be “kept from doing further harm. But they ought not to be punished and they certainly ought not to be killed.”

To which one of her fellow academics replies, “I suppose they ought to be kept in hospitals at vast expense, along with other unfit specimens… Speaking as a biologist, I must say I think public money might be better employed. What with the number of imbeciles and physical wrecks we allow to go about and propagate their species, we shall end by devitalizing whole nations.”

“Miss Schuster-Slatt [an American] would advocate sterilization,” said the Dean.

“They’re trying it in Germany, I believe,” said Miss Edwards [the biologist]. ****

Hello? Did someone invite Heinrich Himmler to give a series of guest lectures at this college?

Well, no. They were just talkin’ eugenics, which was Settled Science once upon a time, between the world wars. The West–primarily Britain and America–was talkin’ it, and passing laws against reproduction by “the unfit”; but in Nazi Germany they shifted eugenics into high gear and started killing people. After all, it’s a sure way of getting rid of the unfit.

And Margaret Sanger founded Planned Parenthood, to get rid of the unfit by means of abortion.

So we had all this Nazi stuff floating around in our culture, believed in by the best and smartest people, no one dared venture into Eugenics Denial for fear of being mocked and cast out of polite society.

A lot of people shut up about eugenics after it became well known how the Nazis put it to work. The word “eugenics” fell out of use. Nobody wanted to sound like Himmler.

But it was there–respected, exalted, socially acceptable, absolutely a part of our culture. In Gaudy Night we see it in Britain in 1936, before the Nazis started bombing London.

We see it even more vividly in Agatha Christie’s Curtain, written during World War II but not published till 1975. The ideas most commonly associated with the Third Reich were deemed respectable in Britain–even while the Germans were attacking and it was an open question whether Britain would survive.

The evils of our own day have deep roots. Very deep indeed.

May Jesus Christ defend us. 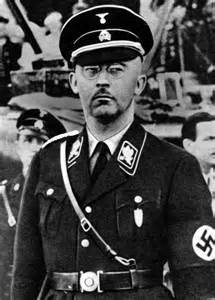 Imagine the furor–or should I say fuhrer?–if the National Portrait Gallery had a “Struggle For Justice” exhibit featuring a statue of Heinrich Himmler.

Well, they don’t, but they’ve got the next best thing–a bust of Margaret Sanger, who founded Planned Parenthood as an integral part of something that she called “the Negro Project,” aimed at ridding the world of “inferior races” (http://www.christianpost.com/news/black-pastors-protest-smithsonian-bust-of-planned-parenthoods-nazi-like-founder-margaret-sanger-in-civil-rights-exhibit-143901/). In other words, her position was the same as Himmler’s, but lacking the kind of resources he had at his disposal–the SS, concentration camps, etc.–Sanger sought to accomplish the same end by different means: to wit, abortion.

Meanwhile there’s all this foof about tearing down Civil War statues, which commemorate things that stopped happening 150 years ago, but this statue, which honors a thoroughly wicked thing that’s still happening today, stands.

Don’t get me wrong. I don’t approve of erasing history, and I don’t want Sanger’s statue destroyed or hidden. But to leave it under any roof pertaining to anyone’s idea of “justice” is way too rich for me. This Himmler in skirts is part of history; we ought to know about her; we ought to know she intended abortion as a means of practical genocide; and in fact, we’d better not forget her. Because it’s dangerous to forget history: it has a way of turning back and biting you.