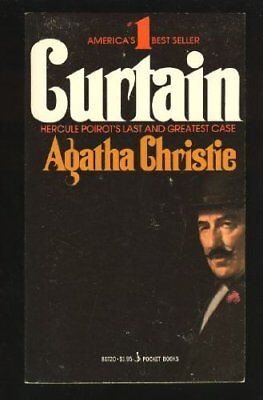 I don’t generally review books I’ve already reviewed. But I’ve just finished re-reading Curtain and it shocked me all over again.

This was a heckuva book to be writing while World War II was going on and German V-2 rockets were killing people on the streets of London. But that’s when Agatha Christie wrote it–the story of Hercule Poirot’s last case, written when she still had two more decades’ worth of Poirot mysteries to write–and then she locked it in a safe for 30 years.

In Curtain the world war is never mentioned. One senses that the action in the story could have taken place either just before the war or just after–although in terms of the Poirot timeline, that would be impossible. But that’s not why I’m writing this review.

Have you ever been involved in a group conversation in which one or two persons comes out with something totally outrageous, wicked, beyond the pale–and gets away with it? Worse–everybody else sort of tepidly, timorously agrees with it, even though you can tell by their body language that they don’t really agree and would just like this part of the evening to be over. So somebody drops a bomb–“I don’t care what they say, people who say they don’t believe in Climate Change ought to be jailed!”–and everybody else nods their heads, maybe mutters “Yeah, uh-huh,” and totally fails to call them out on it. Because, I guess, who wants to get into another one of those interminable arguments?

A lot of that goes on in Curtain. Characters natter on about useless lives, lives not worth living, people who are a burden to others, and how they all need to be humanely put out of the way, cull the crowd for the good of the species etc. And no one else ever says, “What are you, some kind of Nazi? You sound like Heinrich Himmler talkin’–if he were here, he’d fit right in!” I mean, we don’t even get an “Oh, come now!”

Now… why would Agatha Christie include such conversations in her novel unless she had heard them, probably pretty often, before World War II broke out? Heard them at dinner parties or casual get-togethers. Heard them from well-educated, highly thought-of people. After all, it was eugenics–which was Settled Science in the 1930s. You had to agree or you were anti-science.

Gee, I wonder why so many people in Britain became convinced that their ruling class wanted to sell them out to Hitler. Well, has our ruling class sold us out to China? Honk if you don’t think it looks that way.

This is a shocking book. Agatha Christie wrote it while her nation was fighting for its very life against an enemy that believed in eugenics and had no compunction at all about putting it into grim practice–an enemy with which her nation’s ruling class had much in common.

One wonders to what extent God had to intervene to keep Britain from entering into an alliance with Nazi Germany.

I’m finally ready to type up my review of Curtain by Agatha Christie, the story of Hercule Poirot’s last case. It might seem kind of an odd thing to publish in a magazine devoted to Christianity, but I think it’s pertinent.

Here’s what I find so interesting. Charles Dickens’ A Christmas Carol was written almost exactly 100 years before Curtain; and in the interval between the two, the Christian culture of Britain and the other Western countries changed so much as to be almost unrecognizable. In what way did it change, and how did it happen?

Sort of a challenge.

After all these years and all their disappointments, The Smartest People in the World still haven’t given up on euthanasia and eugenics. I doubt they ever will. Here’s a snapshot of where they were in 1940, 1975, and 2014.