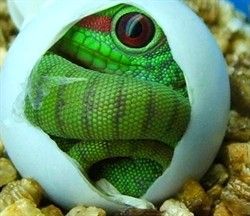 What? You thought I was going to run a picture of a sex bot? Uh-uh, no way. Here’s another day gecko, this one working on emerging from the egg. Cute little beggars, aren’t they?

How crazy can it get?

They’ve set up brothels where you can “have sex”–I really must put that in quotes, because it’s only a simulation of sex–with “sex bots,” robotic facsimiles of women. Sort of like having a romance with your toaster-oven. Like, dude, it’s a machine, it’s not real.

Anyway, these sex bot brothels have begun to take off, which is now perceived as a threat to brothels where the whores are real. They call themselves “sex workers” now. I will stick to the older terminology. The whores are saying that sex bot brothels are “dehumanizing and dangerous,” “an insult to sex workers,” and “encourage disrespect toward women” (https://www.thesun.co.uk/tech/7289486/sex-robots-prostitutes-workers-love-dolls-brothel/).

Uh, like, the regular whorehouse doesn’t encourage disrespect toward women?

Oh, no, say the whores. See, goin’ to the sex bots will alienate the immoral slob of a man “from healthy sexual experiences with real women.” Good grief. Someone’s sure to say I’m making this up, it’s all a satire. I only wish it was. I’m only a fantasy writer, I can’t invent stuff this loopy.

They say, “Sex workers offer… authentic intimacy and two-way affection.” In fact, going to a brothel and paying some stranger for sex (or a simulation thereof) “enhances his ability to be intimate with other women.” That oughta fly in divorce court: “I only hired this here prostitute, your honor, to enhance my ability to be intimate with my wife.” Yowsah. And heavy consumption of pornography makes the heart more loving, the eyes brighter, and the pelt shinier.

It is embarrassing to be living in this age! I feel like my ancestors, looking down from Heaven, are thumbing their noses and making rude noises at me–if they don’t just turn away in pity.

O Lord! Remember that these things are done without our consent, against our will, and over our objections.

None of this crazy crap can possibly turn out well for us.

The German Green Party (“There’s no problem in the world a candle-light vigil can’t solve!”) has proposed legislation to provide “free prostitutes for disabled and elderly” persons ( http://www.germanpulse.com/2017/01/09/german-green-party-prostitutes-disabled-elderly/ ). The ho’s–oops, we’re supposed to call them “sex workers”–are to “provide sexual relief” to those who aren’t getting any.

How could they have forgotten to include this in Obamacare?

They tried to sneak this in, a few years ago, in Britain, but had to stop because of public protest. Some selfish persons actually resented their tax dollars being used to treat others to tricks. Kind of puts a new spin on the phrase “Trick or treat.”  In the Netherlands, a date with a hooker is “a deductible medical expense.”

(All right, you guys! Where’s the hidden camera?)

By the time secular humanists are done with us–presuming they get their way, and God doesn’t smite them–we’ll be reduced to transgendered, bug-eating, Play Doh-kneading, unemployable, whore-using, euthanized at the government’s earliest convenience, safe space-craving, whining, sniveling ding-dongs. Which is, I think, exactly where the Soroses and Kerrys of this world want us.