I’ve got to publicize my idea for a hit TV series before someone else thinks of it, so here it is.

Nut Squad relates the adventures of a group of delusional crackpots who show up at crime scenes, claiming to be from a secret government organization, and provide the investigating police with totally loopy scenarios–like, say, “Inspector, this man was not murdered! That thing that looks like a gunshot wound is where a kind of alien mantis chewed its way out of his body…” And they produce credentials that look real–until they’re checked, of course–so the cops have to listen to them. It’s sort of The X-Files meets The Three Stooges. The looks on the detectives’ faces as they listen to this pure crapola–I mean, what actor wouldn’t love playing one of those scenes?

A Nut Squad episode will usually end with the police chasing the Nuts and trying to shoot them, they’re so mad at all the time that got wasted, listening to these boobs. The thing is to see how far the Nuts can push the situation before it explodes in their faces.

It is a mystery to me, how they contrive to make daytime TV so frightfully awful. The shows are all the same: maniacal worship of celebrities, frantic praise and applause for every little thing done by a celebrity, with here and there a quiet moment for the dispensing of some tiny tidbits of conventional PC poppycock. Like, “I’m with Madonna on this one–it’s time for the oppression of women to stop.” Yeah, Madonna is one of the oppressed.

But the low point, truly, was the sneak preview of a clip from J. Lo’s hot new music video, I Ain’t Yo Momma. You would’ve thought it was the cure for cancer, the way they carried on about it. I had to keep telling myself, “Really, this is not as bad as a toothache.” It only seemed as bad as a toothache.

I can’t help it: this is something that drives me positively bats, plays the devil with my blood pressure, is surely bad for me, and I just can’t seem to avoid it anymore. I hate going to the doctor.

Ah, well–post another hymn, Lee, and try to calm down.

Time to retreat back into the past!

Today’s ramble down Memory Lane has taken me to revisit The Sons of Hercules, an anthology of low-budget Italian movies chopped up to fit into a TV time slot. This was probably my favorite TV show of my early teens. It also provided decent jobs for a lot of underemployed body-builders, so don’t knock it.

You’ve just gotta love this theme music. Well, okay, you don’t have to. We aren’t all cut out to appreciate gems like Mole Men vs. the Son of Hercules. It takes a discerning palate. Like mine.

The two main characters, cops Spike and Evita, both of them undocumented asylum seekers, “are real good buddies and–ahem!–a lot more,” says executive producer Yersinia Pestis. “In each and every episode, they’re going to make the world safe for Diversity by stomping out anyone who won’t get  behind the program.

“Just in the pilot alone,” Pestis said, “Spike and Evita hunt down the last white family in the city, bust up a Climate Change denial ring, deal with an evil Christian musician who tries to refuse to perform at a gay wedding, and help their local community organizer create a safe space for looters.”

“Best of all,” he added, “several major universities have promised to give course credit to students who watch Diversity Squad. And our two stars–who are computer-generated, by the way!–will be visiting campuses to encourage students to sign an oath pledging their lifelong loyalty to the cause of Social Justice. 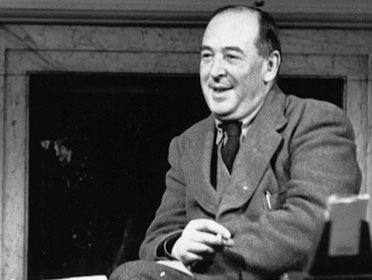 Here is a quote that just jumped out at me this morning, as I was reading the “Christian Marriage” chapter in Mere Christianity, by C.S. Lewis.

“[M]ake sure that you are judging me by what you really know from your own experience and from watching the lives of your friends, and not by ideas you have derived from novels and films. This is not so easy to do as people think. Our experience is colored through and through by books and plays and the cinema, and it takes patience and skill to disentangle the things we have really learned from life for ourselves.”

Wow! And he wrote that before we had television, comic books, and video games to confuse us even more.

In Don Quixote, Cervantes wrote of a man going totally bonkers just from all the silly books he read. But Lewis is not talking about popping your cork. No–he’s talking about not being able to tell the difference between the inside and the outside of the bottle anymore, or even to realize that the bottle is there.

What do any of us know that we really only know from television?

If that thought doesn’t make you want to cling to God’s word with both hands, for all you’re worth, I don’t know what will.

Don’t you love it when something you haven’t seen since you were a kid turns out to be every bit as good as you remembered it, when you finally see it again, 40 or 50 years later? (And don’t think I ever dreamed I would one day be writing that sentence!)

How could it miss? You start with a bunch of people from all different backgrounds, stuck with one another on a wagon train; and the train has to cross up to two thousand miles of dangerous, untamed country.

Add to that the truly brilliant concept of focusing each episode on a different person, and enlisting the best actors in America to play those characters. The guest star is the top banana in the episode; the regulars are on hand to provide continuity from week to week and to keep the overall story moving. For example, the episode entitled “The Joshua Gilliam Story” stars Dan Duryea as a psychopathic con man posing as a beloved schoolteacher, and joining the wagon train in that disguise.

Imagine a TV show today with guest stars like Bette Davis, Peter Lorre, Ernest Borgnine, Mickey Rooney, Claire Trevor–aw, heck, you can’t even get a feature film with stars like that anymore.

Maybe you think I’m talking through my hat. “C’mon, it’s only a western! Bang, bang, gotcha!” But really–the Wagon Train format allowed the show’s writers to do any kind of story they pleased. It never got stale. Drama, comedy, confrontations with the unknown, psychological study–you’ll find ’em all in this show.

I received for Christmas this year the complete Season 3, 37 episodes, released by Timeless Media Group and available via amazon.com–1,900 minutes of just about everything. The Western setting is just the background: the business at hand is the characters.

And yes, it’s as good as I remember it, if not better. And all done without having people leering at each other before they tear off their clothes to fornicate. You actually have to have a few functioning brain cells to appreciate the sometimes-subtle nuances of a Wagon Train episode.

Ugh–the thought of trying to make this series today, with what we laughingly call “actors,” uttering lines written for them by certified idiots… Fap! Now I’m gonna have bad dreams about that.

Martin Shaw, one of our favorite actors, a few years ago produced and starred in a remarkable TV series which we’ve just viewed on youtube.

Apparitions tells of the struggles of a Catholic priest (Shaw) forced by circumstances to become an exorcist, again and again. This is not every Christian viewer’s cup of tea, but stay with it: there’s a payoff.

As played by Shaw, the priest stands tall for his faith, uncompromisingly committed to God. He delivers lines, one after another, that go off like depth charges, way down there where it counts, devastating the smug secular mindset. And at the same time, he projects gentleness and love.

Only Martin Shaw can play the role like that.

British TV, even more than American TV, has a habit of idly, routinely demeaning Christianity and Christians.Politically correct screenwriters, who would dive into quicksand before they even whispered a discouraging word about Islam or Wicca or whatnot, seem to feel obligated to spew venom at the Body of Christ. Some do it casually; others with a dark gusto.

I loved the way Shaw confronted this head-on. That took courage.

It’s sad that it takes courage, these days, to speak up for Christ in what was once a Christian country.