For a while there I was thinking there were never any consequences for wicked and absurd behavior, as long as you’re an academic. But now comes news that it’s payback time for two of the colleges that have disgraced themselves the most–Evergreen State College, in Washington, and the University of Missouri (http://www.foxnews.com/us/2017/09/01/colleges-struggle-over-defending-or-curbing-free-speech.html).

As a result of highly-publicized, ultra left-wing hooliganism, Evergreen’s freshman enrollment is way down, resulting in a $2.1 million shortfall in revenue. At Missouri State, freshman enrollment is down 35%, donations to the athletic department are down a whopping 72%, they’ve had to get rid of 400 jobs, and close seven dorms, renting them out for one-time-only purposes.

These two schools are hurting, big-time. It serves them right, and it would be very good indeed if the whole university system got it likewise. Time for Antifa U. to be shut down.

America’s “higher education” system is at least ten times bigger than it needs to be, wasting billions of dollars of our hard-earned money, and producing tens of thousands of sullen, ignorant, unemployable, radically immature, and thoroughly unreliable young people. It employs highly-paid idiots to be gender studies professors, diversity consultants, microaggression rapid response teams, and whatnot. It is swollen far, far beyond what is good for the country. It is a tumor that needs to be removed.

It’s really quite simple: There is no reason under the sun why absolutely everybody has to go to college. And it’s time we as a  nation got that through our heads. Trust me: you don’t really need a degree in Superhero Studies to get ahead in life.

Evergreen State College, in Washington–the state legislature is trying to de-fund it, but no luck so far–home of a “diversity day” that bars white persons from the campus, is in the news again.

The interim provost there has asked the school’s professors to go easy on the thugs and goons who “have diverted time and energy from their academic work… to promote institutional change and social justice” (http://www.campusreform.org/?ID=9398)–by vandalizing property, threatening and assaulting anyone who won’t agree with them, shutting down classes, and turning the campus into a combat zone.

Oh, heck, yeah, they should be rewarded for that! Good grades for all! Everybody who threw a brick through a window, or at someone else’s head–a nice big A for you!

Why don’t they just offer a degree in hooliganism?

Just cut it down.

Do You See Violence Here? 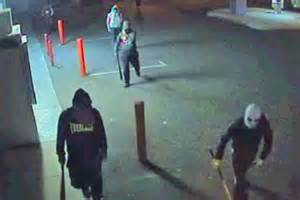 Evergreen State College (Washington) just can’t seem to stay out of the news.

A couple of weeks ago it was “no whites allowed on campus” day, with a professor put in fear of his life when he showed up to teach his classes. This prompted the state legislature to introduce a bill to defund Evergreen.

Looks like that’ll be needed sooner rather than later.

Evergreen State College, paid for by the taxpayers of Washington State, was in the news last week for holding a “Day of Absence” intended to ban all white persons from the campus (http://www.foxbusiness.com/politics/2017/06/01/racist-protests-shut-down-evergreen-college-as-lawmakers-look-to-strip-funding.html). This was, of course, for “diversity.” Things got rather ugly when one white professor refused to stay away that day and tried to conduct his classes as usual. He was probably lucky to escape injury.

In response to this incident and others, there is now a bill in the state legislature to privatize Evergreen over the next five years–and also, as soon as possible, to strip this palace of ignorance of $24 million it currently receives in funding.

Stand up and cheer! This is exactly what this country needs, coast to coast.

Our “higher education” system has become a nursery of bitterness, educational malpractice, and a hatchery of left-wing lunacy. It is monstrously over-funded, over-staffed, and too many people are vegetating there instead of finding productive work and, well, growing up. It has become a millstone around the nation’s neck.

There is a place for pure scholarship, for love of learning for its own sake, for the preservation of our civilization’s cultural treasures. But our colleges and universities have given up that role.

Why in the world should billions of dollars of public money be shelled out for no other purpose but to undermine the country by filling it with angry idiots who don’t know how to earn a living?

Cut it back. Cut it way, way back.

2 Comments   |  tags: anti-white racism, college as a waste of time and money, defund the universities, Evergreen State College, how colleges have abandoned their role in society, liberals vs. America, the new racism | posted in news, Public Education