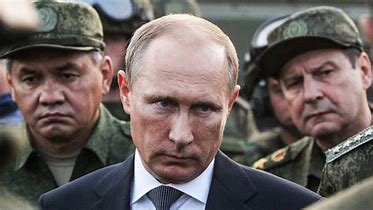 “Are you showing disrespect to me??”

The Russian government–that is, Mr. Putin–will decide what is fake news. And if they bust you for it, you’ll face fines and/or a prison sentence.

As for “disrespect,” that’ll be punished pretty harshly, too. Just to keep people on their toes, they haven’t defined “disrespect” or declared which public figures are to be immune from it. Here in America, that would be all Democrats and their clients.

We are unable to confirm reports that the Democrat National Committee has sought Putin’s advice in drafting the party’s 2020 platform.

All along we were thinking the jackalope is a mythical beast, and it turns out we were wrong!

Jackalopes have been sighted several times this week in various locations throughout the United States, leading some to believe that the creatures have been purposely released into agricultural areas–released as part of a cunning plan by Russia’s leader, Vladimir Putin, and in cahoots with President Donald Trump–to prevent progressive candidates from being elected to local office.

A spokesman for jackalopes said jackalopes are above politics and have too much self-respect to get involved in it.

Zero Facebook referrals–count ’em!–over the past three days: how come?

Well, I’ve figured it out. Putin stole them.

I don’t know how he found the time to get at my blog, what with rigging a U.S. presidential election, rigging the Brexit vote against the globalists, and trying to rig Germany’s upcoming election so as to defeat Angela Merkel and her wildly popular immigration policy: but hey, like Rudi Vallee said in Unfaithfully Yours, if you want something done, get the busy man to do it. And you can’t go wrong, listening to Rudi Vallee.

See, I don’t want to be on the wrong side of history, so I have joined the movement to blame every shortcoming on the Russian boss. We all know, now, that Hillary Clinton would’ve had the White House in her pants suit pocket if Putin hadn’t fixed it otherwise. I have it on good authority that he also sabotaged the Edsel, the Byzantine Empire, and The Tim Conway Show. So it would’ve been a very small undertaking for him to zap my Facebook referrals.

I just don’t know what to do about it.

Somebody told me this morning that there was a report out there that Vladimir Putin had “issued an international arrest warrant” for George Soros, the evil zillionaire who’s currently funding anti-Trump riots ( http://investmentwatchblog.com/breaking-putin-issues-arrest-warrant-for-george-soros/ ).

One) None of the major news websites–Drudge, for instance–picked it up all day.

Two) Although the story was reported on a lot of sites I never heard of, closer examination showed the same story, word for word, on many different sites. That means they’re all feeding from the same dish.

Three) Then I read the story, and encounter a paragraph like this:

“The thing that should give pause to the Heads of State Western–” what? even a journalism school graduate wouldn’t write like that–“is like Putin did in freeing Russia from those who wanted to bring the total economic and social collapse and beat up in jail all those who have tried.”

Can you make sense of that jumble of words? I can’t! The whole thing is riddled with such gobbledygook.

My advice: Whenever you encounter a supposed news story that has all three of these warning labels… don’t believe it.