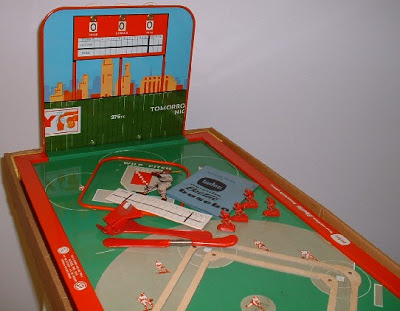 My brother and I got this toy for Christmas once, sometime in the Fabulous Fifties: Tudor Electric Baseball.

The ball was a tiny white magnet which you “pitched” with a kind of catapult, aiming for a tin sheet representing the batter. Behind the sheet sat your opponent, who, when he heard the ball stick to the other side of the screen, smacked his side with a spring-operated plastic bat. If the ball landed on a circle marked “hit,” he flicked a switch and these little plastic guys with strips of celluloid on their bases ran around the basepaths, accompanied by a loud buzzing sound as the whole gameboard vibrated energetically. The basepaths were thick cardboard guides. Without them, the runners would have dashed all over the place in a kind of brownian movement.

Our friend “thewhiterabbit” had an Electric Football game. He soon gave up trying to make any sense of it.

Colorforms Baseball, which we also tried, had no electricity–only a dial on a spinner which, when spun, would stop either on an out or some kind of hit.

But it’s the thought that counts!

You didn’t think I’d post a picture of this blasphemous nonsense, did you? Here, instead, is a little newt peacefully swimming toward the camera: God’s stuff, clean and good and sane.

Sometimes this job really sucks, having to report all this culture rot.

The latest abomination is something they’re calling a “Gaytivity scene,” blaspheming the birth of Jesus Christ by showing Him with a set of “gay” pseudo-parents, two men or two women (https://www.rushlimbaugh.com/daily/2017/11/28/be-warned-folks-the-gaytivity/).

That’s really all I want to say about it. Hymn requests, anyone? And a brief prayer:

O Lord our God, remember that although we, too, are sinners, these things are done without our consent, against our will, and over our objections. In Jesus’ name, amen.

Just because Christmas is over doesn’t mean it’s over. It has to work all year!

Attention, newcomers to this blog: I like to start each day here by posting a hymn, and I like to use hymns requested or suggested by the readers.

And there’s no rule that says we have to limit it to just one hymn per day.

So let’s hear from some of you whom we haven’t heard from before. If you’ve got a hymn that you’d like to share with the rest of this little blog community, please let me know. Just post a comment including your request, post it anywhere on this site, and I’ll do the rest.

I’ve seen the cover art for The Throne (Bell Mountain No. 9), Kirk DouPonce has done another splendid job… and if I can swing it, I’d like to post it here so you can see it.

I’m hopeful that The Throne will be made available in time for Christmas. My books, by the way, make fantastic Christmas gifts. Well, all right, very small beer indeed, in light of what Christmas is really about–like, it’s only the Word of God made flesh and personally coming into our fallen world to make atonement for our sins and win for us eternal life. So can I say my books my nice gifts, any day of the year?

So, keep your eyes peeled for The Throne cover art, today or tomorrow, and let me know how you like it.

I love this 1890 hymn by Fanny Crosby. This version is performed by Nathan Sarvis, autoharp, Lyle Howard, guitar, and some of their family and friends.

I’ve just finished taking down my Christmas tree. *sigh* I pray next Christmas will find us all still here, all healthy and of sound mind, all grown nearer to Our Lord Jesus Christ–and our country on its way back to its right mind.

Is it too late to post one more Christmas carol? Nah!

This is the U.S. Army Band performing Gesu Bambino, and it is knock-your-block-off beautiful! I always loved this carol, but I never knew what it was called. My wife has enlightened me: it’s one of her favorites.

Remember, the hymn shop is open from now on, I will take requests day or night, and there’s no reason for anybody to be bashful. Step right up and let me know if there’s a hymn you’d like to hear on this site. All you have to do is scroll down a little and “Leave a Comment.”

Ha ha, he went out so now i got his blogg.

I woked up this morning with kinda scare, i was al rapped up in somethin like a net and i culdnt get loose. Yiu kno i ben sleepin in my prefesser’s toolshed, he let me stay thar, Wel it turnt out i must of wofe a kocoon in my slepe! Thay kepe shootin me up with moth Hormoanes, that’s the exspearmint thayre doing and i dont see how thats sposed to give me wimmins Cromosoames but at leest i get to stay here in collidge for freee as long as i let them do exspearminuts on me.

I went home for Chrismis but they are all stopid peple and thay wuldnt let me in, “Open up i sayed you got to let me in for Chrismis but” my dad he sayed i coldnt come in if i was gonna say thare istnt no God. Wel I have got to say that! dont i? becose i is a interllectural, i not some christin dop that beleaves in God or angells or any of that bible stuf. so i sayed to my Dad “yiu oghujt to let me in so’s i can enlihgjtin yuo, why yiu want to be ingnorent”? and then he tol me to get lost. And they was havin Turky or somthin, i was so hunggery i cold ete a hoarse. Fortunutly they was a Snowman in the yard nex door and he had on a red whool hat so i ate that. It was Okay but it wastnt Turky was it!

Then thar was som peple who come singin Chrismis Caroles so i explaned to them that was stopid thing to do becuse thar istnt no God and Jesus was only just a nice guy and probly wastnt a reel person anyhow but they was too dum to lissten to a interllectural.

My prefesser he is so smart! Wen i com back and tole him al abuot it do yiu kno what he sayed! He sayed Its “onely natrul that ordrinary dum peple hates us interllecturals and thay dont want to do like we say but” somday wen Hillery is Presdint thay gonna al have to do what we say weather they lik it or not!! becose she going to mak them.

And now i got to go fined a hat or somthin, too bad i ate that Snowmans hat, becose its nite time and it gettin cold and my moth antenners on my head they freezin somthing awffle! and i hope i can weaf me another kocoon becose my prefesser he never gave me no blancket.

One more morsel of Christmas–this one courtesy of my friend “jessicafischerqueen,” who posted this video on my chess forum page.

I dunno, where is everybody today? Are you all Christmased out, or what? Or just plain tired? Well, who would blame you? I’m running on the fumes, too.

Anyhow, I’m still taking requests for hymns and Christmas carols, so don’t be shy, let me know what you’d like to see and hear.

Christianity came to Iceland around 1000 A.D., and in very little time, the converts were holier than the missionary–a hasty and troublesome man whom, I suspect, the Church wished to get rid of by sending him to Iceland. That’s the story told in Njal’s Saga.

Christmas doesn’t look or sound so different, up there on the northern edge of the world. Anyway, I thought you might enjoy a glimpse of it.

Be patient: the music doesn’t kick in until this video’s halfway over. There is nothing wrong with your computer. Anyhow, when you finally hear it, it’s worth waiting for.

Most of us already know All Through the Night, but I’ll bet hardly any of us ever heard it played on a theremin. That’s that weird instrument that makes eerie music for science fiction movies. You’ll know it when you hear it. Invented in 1928, the theremin is the original electronic musical instrument. You play it without touching anything. Please don’t ask me to explain how that works.

It’s the day after Christmas: but the Christ Child lives all year.