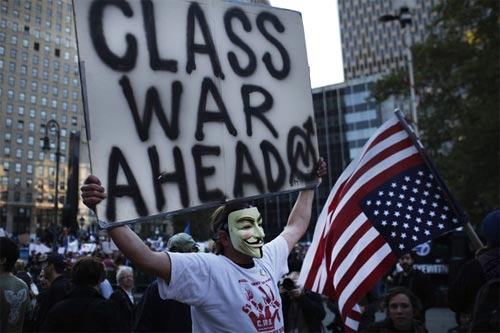 It was six years ago, that I wrote this, and our political class, as crazy as it was, couldn’t begin to compare with what it is today. In only six years they’ve gone from all class warfare to total “transformation” of reality itself.

Do you know people who think it’s a punishable crime for anyone to have more money than they do? In 2013 that’s what Jersey Democrats were selling. And the voters were buying it.

Envy, savage envy, as the foundation of civilization–yeah, that’ll work!

He’s going to eat someone, isn’t he?

Three years have gone by, and their campaign rhetoric hasn’t changed a bit.

One thing I know for sure: no one comes home poor from Capitol Hill.

Are you proud that one of our country’s two major political parties has nothing better to offer than class warfare and racial animosity, artificially stoked up for their own political advantage?

A Reminder from the Scriptures: Sowing Discord is a Sin

Writing by the inspiration of the Holy Spirit, King Solomon said, These six things doth the Lord hate; yea, seven are an abomination unto him: A proud look, a lying tongue, and hands that shed innocent blood; an heart that deviseth wicked imaginations, feet that be swift in running to mischief, a false witness that speaketh lies, and he that soweth discord among brethren.  (Proverbs 7:16-19)

Purposely sowing discord, for one’s own personal or political gain–well, that’s sort of the whole first chapter of a certain political party’s playbook, isn’t it?

Hands that shed innocent blood? Yeah, we do that. In fact, we have someone running for president who thinks it’s a good thing and that public money should be provided for it.

But when it comes to sowing discord–well, where don’t you see it? How much of a college education consists of “These are the people who are out to get you, so you should hate and fear them, and always vote for you-know-who to protect you from them, and punish them for not being inclusive, blah-blah”? How much of person-to-person gossip is aimed at stirring up one against another? And then on a truly grand scale we’ve got class warfare rhetoric and race hustling.

These things are sins; and those who make them their primary means of getting things done will be judged before God.

Just a little reminder from the Scriptures. He who has ears, let him hear.