Scanning the nooze this morning, I felt a need to revisit Psalm 2–which also brought this 1871 hymn to mind, Christ Shall Have Dominion.

It’s getting bad out there. The ungodly are running wild, nothing seems to restrain them. But God is watching carefully, and here’s where the psalm comes in:

Why do the heathen rage, and the people imagine a vain thing? The kings of the earth set themselves, the rulers take counsel together against the Lord and against His anointed, saying, Let us break their bands asunder, and cast away their cords from us.

He that sitteth in the heavens shall laugh: the Lord shall have them in derision. (Verses 1-4)

The Lord is laughing at them–at their vain words, their pretenses, their schemes for a global government with themselves in charge. They are nothing. They are pygmies who call themselves giants. The Lord will give His Son, His anointed, all power in heaven and on earth; and He will break them in pieces like a potter’s vessel.

We must not lose heart! Christ, not they, shall have dominion. This is what we as Christians must believe. God will keep His promises, every last one of them. He has blessed us by allowing us to enter into His labors with Him. We may fail from time to time, but He will not fail us.

When will that happen? We don’t know; God knows. There are Christian men and women not yet born who will do great things. Our job is to do what we can and never, never, never give in to the wicked. 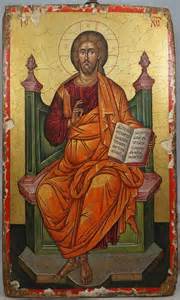 There are those who object strenuously to the world that Jesus Christ, as King of kings and Lord of lords, shall have dominion on the earth (not that they can do anything about it!). We always ask, but very seldom get an answer, “Who would you rather had dominion?”

Who Shall Have Dominion?

Oh, God, look at our… “government”! Have pity on us, Lord, ruled over by the likes of these! And there are worse ones waiting in the wings.

We long for Christ to have dominion.

This psalm might have been written specially for our own time, our own age.

The heathen are raging now–are they ever!–and the people imagine things unmatched for sheer vanity by the delusions of any other age in history.

When God stops laughing at it… watch out.

This Tele-Tubbie wannabe is now our secretary of state.

Secretary of State John Kerry, who made his political bones calling American soldiers bloodthirsty barbarians and then ran for president as a war hero, having won three Purple Hearts without spending as much as fifteen minutes in the infirmary, recently told graduating students at Northeastern University to prepare themselves to live in “a borderless world” ( http://www.catholic.org/news/politics/story.php?id=68831 ).

Let’s see, now… no borders… that means no countries, right? And if there are no countries anymore, well, that would imply a world government–one great big universal country.

Are these globalist morons capable of rational thought?

So, if you can’t do a certain job, but then you make it ten, twenty, or a hundred times bigger than it is already, does that mean you will then be able to do it?

Can men like Kerry, or men like anyone else for that matter, even govern a single city wisely, efficiently, economically, and justly? Well, what city would that be, then? Detroit? New York? London? Camden? Tokyo?

They’ve just begun to peel the lid off the current government of New York City, and the stink of corruption is already rising to high heaven. So, no, they don’t know how to govern a city.

How about a state, then? Well, look at the job they’re doing on California. And when now-Governor Chris Christie was a federal prosecutor in New Jersey, he packed off to jail at least a hundred of our state and city officials, all on charges of corruption. So they can’t manage a state, either.

How about a country? Are they any good at governing a country? If you can answer “yes” to that, there’s something wrong with you.

Dissolving national borders and trying to govern the whole flaming world as one big country–does anyone in his right mind think that will ever work? I mean, look at some of these countries! If you think the U.S.A. or the United Kingdom, among the world’s least awful countries, are governed badly, take a gander at Mexico, Liberia, or Syria.

The dynamics of history never change. There’s always some overly powerful and aggressive psycho who thinks he ought to rule the whole shebang. The only difference nowadays is that instead of a single kook, like Hitler or Napoleon or Alexander the Great, we’ve got a whole gaggle of globalist kooks, like Kerry, who think they and their friends are fit to do the job.

The kingship of the earth is reserved for Jesus Christ, and no other.

Very soon–if not already, depending on where you live–some of you will be blessed by the music of these tiny frogs calling for mates. Spring peepers usher in the spring.

The procession of the seasons, according to God’s ordering of things, is an infallible sign of His sovereign government over all of His creation–a very good thing to remember, in the face of the tide of wickedness and folly that overflows this present age.

Someday, according to God’s plan, all of that will be abolished. He will regenerate His entire creation, and put all of it under Jesus Christ, the King of Kings.

Trust in the Lord.