Some dindle who used to coach in the National Basketball Assn. and is now a chattering numbskull on TV (Yeahbut, yeahbut! He’s on TV! ) has gotten himself into hot water by comparing SloJo Biden with Jesus Christ Our Lord (https://www.dailymail.co.uk/news/article-11154239/Former-NBA-coach-ridiculed-likening-Biden-JESUS-student-loan-debt-cancelation.html).

What would you give for his chances if he’d compared Biden to Mohammed?

On two occasions, Christ took very small amounts of food and performed a miracle that multiplied the loaves and fishes into adequate food for thousands of people–with lots of scraps left over. Prophet Elisha worked a similar miracle on a much smaller scale, feeding 100 (2 Kings 4: 42-44). These, coach, were miracles. They testified to the unique God-given authority of those who performed them.

All Coachie can see is “Republicans are against giving out free food.” Forgiving college loan debt at $10,000 a pop of other people’s money is… well, the same as miraculously creating food for thousands!

No, Joe. Those loans were money borrowed from the American people. When you “forgive” the loans, you’re screwing the people whose money it really was. Your so-called “charity” costs you absolutely nothing! But it’ll cost America some hundreds of billions of dollars.

You do not have the authority to do that; and eternal shame on Congress (in addition to the shame they’ve already earned) if they let you get away with it.

Looking back, it seems incredible that our colleges and looniversities were already so awful, seven years ago. Butler U., in Indiana, was only one in hundreds of citadels of brainlessness.

The University as a Fount of Idiocy

Back then, America’s aggregate student debt had already galloped past a trillion dollars. Gotta be half again as much by now.

Are we getting our trillion dollars’ worth? Or are we just paying these “schools” to crank out moronic malcontents who’ve been taught to hate our country? 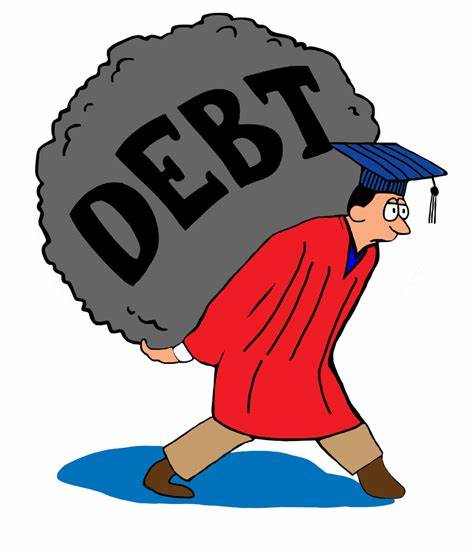 Would you believe it? Some two-thirds of American employees regret having earned college degrees–mostly because it cost them so much and rewarded them so little (https://www.cbsnews.com/news/two-thirds-of-american-employees-regret-their-college-degrees/).

Persons working in jobs requiring STEM degrees (Science, Technology, Engineering, Math)–also known as real stuff–are much less dissatisfied than those who ponied up for degrees in liberals arts or social sciences.

The debt hanging over their heads for years and years is the leading reason for regretting having gone to college; but in second place is the graduate’s “area of study.” Well, yeah–what are you supposed to do with your master’s degree in Superhero Studies? It was all right while you were at college partying and getting wasted every other night; but now that you’re sweeping the floor at the 7-11 and earning the minimum wage, that degree doesn’t look like such a hot idea.

And guess what! America’s aggregate student loan debt is now around $1.6 trillion! But not to worry–Democrat/Socialist presidential wannabe Bernie Sanders has proposed the government just tax Wall Street trading to pay off the debt.

If you think that’s a good idea, think again. Debt can never be wiped out–only shifted onto someone else. And who winds up standing at the bottom of the hill, when all this s*** rolls down? You, sunshine–the undefended taxpayer! ‘Cause there’s no way Wall Street’s just gonna swallow a $1.6 trillion s*** sandwich. This tab will be passed on to the public, one way or another.

Can these guys get me past the censor?

So Manny, Moe, Jack, and Osgood are playing poker, and Osgood draws three cards to make a full house, aces and queens. What a hand! He’s going to win big, because all the other guys are in on this pot, raising each other back and forth until Manny and Moe drop out and Jack makes one more raise–a big one. And Osgood doesn’t have the money to cover it.

Meanwhile you’re sitting in the back of the room reading what Rush Limbaugh had to say about the college admissions scandal (https://www.rushlimbaugh.com/daily/2019/03/12/white-hollywood-leftists-run-giant-scam-on-major-universities/).

“Your master’s degree? What’s that worth?”

He places the diploma on top of the big pile of money in the center of the table.

Should schooling make you stupid? We think not–but that’s what it’s doing. It’s also sucking up vast amounts of money that would be better spent on almost anything else.

Educating Ourselves Into Oblivion

The system’s ruined beyond repair, and most be junked and replaced.

This is almost too bad to be true.

The U.S. Dept. of Education–no Congressional approval necessary, they might as well all just go home–has proposed a rule change that would stick the taxpayer for the cost of turning collidge students into idiots. Under this amendment, “students can apply to have their student loans discharged [forgiven] if they feel that they have been defrauded or misled by their colleges” ( http://townhall.com/columnists/derekhunter/2016/06/16/obamas-education-proposal-could-leave-taxpayers-on-the-hook-for-43-billion-n2178773 ).

Well, zippity-doo-dah! The Dept. of Education estimates that this will cost the public “only” $43 billion. But they could be wrong, heh-heh.

Hey, if you’ve got a degree in anything that has the word “studies” in it–Queer Studies, Womens Studies, Black Studies, Gender Studies, Comic Book Studies–you probably ought to demand a refund: although it was your own fault for wasting your time on such twaddle.

“Wait a minute, I thought I was gonna get an education! Six years in this place, and I’m a bigger chowderhead than I was when I started!”

This proposal is the very spirit of Obamaism. At every step of the way, responsibility is passed along to someone else, as in “That’s George Bush’s fault!” You enter college and sign up for stupid useless jackass courses, and it’s the college that has defrauded you. The college is ruled to have cheated its students, and who pays the fine? You do and I do, of course! Harry Truman’s “The buck stops here” has been replaced by the Obama motto, “S*** rolls downhill.” And guess who’s always at the bottom.

Don’t even think about allowing another Democrat to be president. Our country will not survive it.