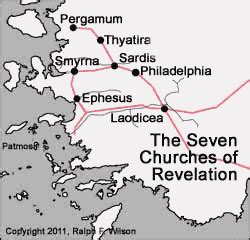 My Bible reading has brought me around again to Revelation. In the intervening time, I had occasion to edit a Chalcedon article by Martin Selbrede which made it clear to me that in Revelation Chapters 2 and 3, Our Lord Jesus Christ is speaking to the “angels”–that is, the leaders–of the seven churches in Asia (https://leeduigon.com/2018/02/12/the-lukewarm-angel-of-laodicea/). The leaders, not the congregations.

So I read Chapter 2 this morning, and this time it made much more sense.

In 1:20, the Lord makes clear that the seven stars that John sees are the “angels” of the churches, and the seven candlesticks are the seven churches. Let’s see what Jesus says to the leaders–pastors, elders, whoever–of those churches.

Ephesus: the “angel” has “left thy first love,” and if he doesn’t repent, the Lord will “remove thy candlestick”–that is, take away his ministry. Or their ministry, if the church is governed by a council of elders.

Smyrna: Persecution is coming. It’s going to be hard. Hold fast! Your reward will be forever.

Pergamos: Whoever was ruling this church let doctrinal corruption into it–probably allowed certain of the congregation to snuggle up again to some of the old pagan gods. This sin is assiduously practiced in many, many “liberal” churches today.

Thyatira: Here, whoever was in charge allowed “that woman Jezebel which calleth herself a prophetess to teach and seduce my servants to commit fornication, and to eat things sacrificed to idols” (v. 20). Have we seen this in churches today? The Lord allowed time for the false prophetess and the erring “angel” to repent, but they chose not to.

The miracle is that somehow the Church survives the churches! Even in the most far-out, all-but-apostate churches, Our Lord has His true servants doing their best to “occupy until I come.” All of them, whatever the denomination whose sign is out in front of the building, are part of the true Church built without hands–and we are united in more ways than we know.

Joshua requested this–Alpha and Omega by the Gaither Vocal Band. Lots of brio in this worship song! I especially like the intro, words of Revelation set to music.

P.S.–Our Esteemed Colleague Joshua has just started his own blog, so let’s see how many views and comments we can give him, to get it launched. 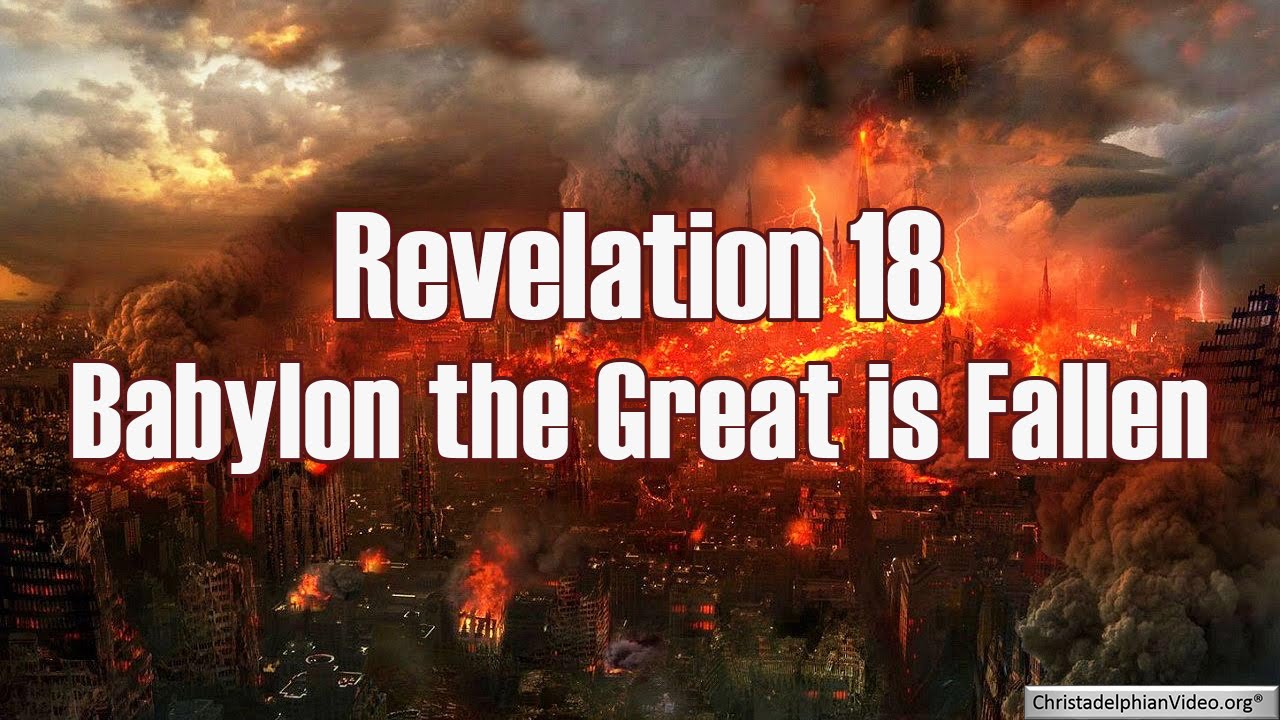 This article is a little long, but stay with it: because Mark Rushdoony nails it.

“Babylon is the kingdom of man,” opposed to the Kingdom of God. It is human beings trying to be gods.

If your Bible reading has brought you around to Revelation, this essay will be illuminating. It’s a “big picture” view of Revelation–speaking for myself, at least, something which I’m always in danger of losing in the details.

What a beautiful hymn! And yet I’d never heard it until this morning: What a Day that Will Be. Message from the Book of Revelation. Sung by the Sharon Bethel Quartet. Listen!

Erlene and Linda both asked for this one: For Your Name is Holy, by Paul Wilbur. The video portion is from the 2000 movie, The Apocalypse, with Richard Harris as St. John the Evangelist. Harris saved up an awful lot of good acting for his old age. But of course the real business at hand here is Revelation itself, which Paul Wilbur has celebrated in music.

Gone are the days…

I understand why people think we’ve living in the Last Days, in the run-up to the Apocalypse, as described in Revelation. We’re living in an age of freaks and weirdos, with powerful and wealthy institutions promoting wickedness for all they’re worth.

Now Disney is about to release a live-action remake of its 1991 animated cartoon feature, Beauty and the Beast, featuring what is proudly billed as the “entertainment” giant’s “first exclusively gay moment” ( http://www.nowtheendbegins.com/disney-first-exclusively-gay-moment-hits-screens-beauty-beast-live-action-version/ ). I think there are a lot of us who would like to be excluded.

This is a film intended for children. To teach them that “gay is great,” I guess. Like they teach them in the public schools. Like parents allow strangers to teach them. Why do they allow it? Don’t ask me. Ask the Bible. Romans Chapter One, the part about reprobate minds.

This is evil, this is poison, and those of us who oppose it have no power to stop it. We can’t get at the controls of the runaway train.

What can we do? More to the point, what will God do?

Some of the ruins of Babylon, dug out of the desert

We don’t have television in our home, so I miss some of what is going on with our culture. But I went to the eye doctor today, so I saw more TV than is good for me.

Bad enough there was an alleged newscast in which the alleged newsman prattled, “So Trump likes torture! Hey, that’s bad news for Melania!” No media bias here. And bad enough it was followed by a Democrat commercial urging the public to “stand with Governor Cuomo and Senator Schumer to preserve your right to healthcare!” By preserving Obamacare, is what they meant. Those things were annoying, but not unexpected.

What really threw me was a Hallmark commercial which proclaimed, loud and clear, that the famous card company has gone over to the dark side.

Valentine’s Day. Scenes of long-term, loving marriages, one after another. And old people with their grandchildren. Very sweet. And just thrown in, alongside unions sanctified by God, a couple of homosexual “marriage” proposals and anniversaries. Not sanctified by God, but condemned in Scripture as mortal sin.

When I looked on youtube afterward, I was horrified to discover that Hallmark has produced many TV ads along these lines. No, I will not post any of them.

We all have sins to fight against, and sometimes sin wins. Otherwise, we wouldn’t need a Savior and God would not have had to send His Son to earth.  Fornication in all its varied forms has always been with us.

But what’s different in our time is the all-out efforts by important, wealthy, powerful and influential people to rebrand sin as virtue and convince the rest of us to “celebrate” it. This is more than ordinary sin. This is worse. They do it to make more money. They do it to get more power. And it is by their work that Satan seeks to establish his kingdom on the earth. His parody of Christ’s Kingdom.

Our culture is being corrupted and debauched. We have a thousand Jeroboams out there, going all-out to make the people sin. To estrange them from their God who loves them. To lead them into condemnation. This, I do believe, is the Babylon discussed in Revelation: which God has marked for destruction. I am afraid that this is our Babylon.

I doubt we have the strength to stop it. That is something God will do. It’ll be hard enough for us just not to give in to it: to hold out, to be faithful, to endure until the end. Not to accept it. No matter how many politicians, teachers and professors, big corporations, and bent churchmen try to make us accept it.

Because even if everyone else in the world declares it’s right… it will still be wrong.

Does anyone mind another worship song today? This is For Your Name is Holy, sung by Paul Wilbur, suggested my Linda.

The accompanying video is from a 2000 film, The Apocalypse (also presented as The Book of Revelation), starring Richard Harris as St. John the Evangelist.

Some Christians don’t approve of movies based on Scripture. That’s no idle objection: it’s so very easy for a movie to get it wrong, and that’s something you don’t want to do with the truth of God’s word.

But there’s also something to be said for a work of art that moves the viewer to see Revelation as if for the first time, and to feel something of what the old apostle must have experienced, alone and exiled to a tiny island, when he was given such a vision of Christ’s glory. Even more of a vision than the one received by the prophet in Isaiah 6. These are things very, very hard to capture in words alone–and do we not greatly desire to capture them?

Here’s Morris Chapman, with No More Night, inspired by God’s promises in the Book of Revelation (“He makes all things new”). Nice way to start a Sunday.

And I think I’m caught up in my hymn requests for now, so please, folks, keep ’em coming. If you haven’t requested a hymn before, well, don’t be  bashful, anyone can do it. Just “leave a comment” at the bottom of a post, mentioning your hymn request and anything else you have a mind to say.

Make a joyful noise unto the Lord.