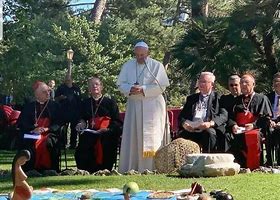 Is the Pope Catholic? We wonder.

I’m finding these reports very hard to believe; but they’re all over the Internet and the pretty much jibe with one another; and they’re no more bizarre and disturbing than a very many similar incidents we’ve already seen in certain American churches. See this blog’s archives for my articles on “Paganism in the Church.”

They’re having this “Pan-Amazon Synod” at the Vatican, and it sounds like a festival of syncretism–that is, making a hash of Christianity by mixing it with paganism. It’s complicated, but here’s an article from The American Spectator that provides details and analysis (https://spectator.org/the-strange-gods-of-pope-francis/). Its title, “The Strange Gods of Pope Francis,” gets to the heart of the matter.

So we have “Indian activists… perform[ing] pagan rituals in the Vatican gardens,” with the blessing of Pope Francis and his bishops, an image of an ancient Inca goddess, Pachamama, trotted out as “Our Lady of the Amazon,” and “two men,” unidentified, who tossed the wooden image into the Tiber River. Church authorities had it recovered, cleaned, and restored to its place in the powwow. There’s also a painting of “an Amazonian mother suckling a dog.” What’s that about? Don’t ask.

Sounds like a Presbyterian Church USA national conference held some years ago, which featured all kinds of pagan humbug–the videos of which have since been taken down.

Analyst George Neumayr says that what this wing-ding is about is to “strengthen the UN-Vatican alliance,” a project dear to the hearts of the Pope and certain German bishops.

Which means that the ultimate vision, here, is one of a socialist global government backed up by a syncretistic mish-mosh of assorted religions with the Vatican, and either Francis or his hand-picked nature-worshiping successor, in the catbird seat.

And all the good and faithful popes of history are turning over in their graves.

Does this pope’s Bible have nothing to say about idolatry? Does he even have a Bible?

Whatever it is that’s going on here, it doesn’t look like any kind of Catholicism that any of the Catholics in my family would recognize.

He’s going to drive all the Catholics out of the Catholic Church if he keeps up these shenanigans.

P.S.–Here is an article I wrote covering the Presbyterian Church USA General Assembly of 2010 (https://truedsicernment.com/2010/08/26/the-presbyterian-church-usa-not-christian-anymore/). All the video of this weird spectacle has been cast into limbo: they decided they didn’t want anyone to see it anymore. Trust me, you wouldn’t believe it if you saw it.

This month’s Chalcedon editorial warns us: “What begins with erasing God from society and institutions must make its way to the hearts and minds of believers.”

It’s not that the Church, or Christ’s Kingdom, is going to fail. But we as individuals can; and history is littered with the bones of failed countries and societies.

We don’t want America winding up there, do we?

The temptation is always “Go along to get along.” And so we compromise with a Godless world. We want people to think we’re nice guys. Next thing you know, we’re attending a baby shower for a woman who’s having a baby by her “boyfriend” while still married to her husband.

Cultural compromise is giving away half the Church’s ground whenever the world demands it.

Faithfulness has to win back the ground. Has to–or America is finished.