If you’ve been reading my Bell Mountain books, you know that Ryons, the boy king who was born a slave, has a guardian who never leaves his side: Cavall, the hound.

This is a picture of a dog who looks enough like Cavall to be him.

In The Thunder King, the hermit, Merry Mary, knowing that she will die soon, commands her dog to stay with the boy and protect him. A child wandering all alone in Lintum Forest needs a wise and valiant dog. Cavall has been with him ever since–to the rescue of the city of Obann, and all the way out to King Thunder’s fortress and back.

At this point I don’t know where they’ll be going next; but wherever it may be, they’ll go together.

The Giant Birds in My Books

The “terror bird” in this National Geographic video is very similar to the huge, flightless, killer birds that haunt the plains of Obann in my Bell Mountain books. One of them killed Martis’ horse and ate it, almost bagging Martis, too. Another was raised from a chick by Perkin the wanderer and is now a kind of bodyguard to King Ryons. Perkin named it Baby.

If you’ve ever wondered what these creatures look like, this video will do.

These are fearsome predators, and you don’t want to be walking alone on the plains when one of them is hungry. You probably don’t want to be riding, either: the bird can outrun most horses.

Not at all a poor guardian for a boy king with a lot of enemies!

A Test for True Love

After 39 years of marriage, I’ve finally hit on a test for true love. If you can answer this question “yes,” after 39 years, your marriage is founded on true love. And the question is:

When you think of your wife (or husband), do you ever think, “Gee, I wish we could’ve been kids together!”

Are you kiddin’? Like, as quick as boiled asparagus, baby! How I would have loved for us to play with wax dinosaurs, or my Erector set, or Monopoly, on a rainy summer afternoon. Or to lead her through the woods to Hangman’s Tree. Or to the throne-shaped stone in the woods, that I’ve salvaged, so many years later, to be King Ryons’ throne. You bet I’d like to share those things with Patty! And I’m sure I would’ve enjoyed her father’s running commentary on various radio programs (alas, her parents died before we met).

I am rather glad, though, that she never knew me between the ages of 15 and 25.

How One of My Characters Grew: Old Uduqu

One of the delights of writing fiction is, when you introduce a character, you really don’t know where he’s going to wind up.

Uduqu, the old Abnak sub-chief with a scar from a stone axe on his forehead, walked onto the stage early in Book No. 2, The Cellar Beneath the Cellar, and is still here, seven books later. He was just a walk-on, but soon began to fill a major role in the stories.

Once or twice the story put him in such peril that both my wife and my editor were convinced I’d killed him off–and were they mad at me for that! But I’ve come to have such an affection for this hard-fisted old man that I don’t see how I can carry on the tale without him.

He befriends King Ryons and comes to look on him as a kind of grandson. He discovers God and comes to love Him, always striving to know Him better. He rescues Helki from a charging army, and wins a giant’s sword as a trophy, becoming the king’s personal champion. And as his overworked legs begin to fail him, Uduqu discovers reading and writing–the very first Abnak ever to make a serious go of literacy.

He has been within sight of the great sea in the West, crossed the mountains in the East, and marched all the way out to the Thunder King’s fortress in Kara Karram. Along the way he fights a desperate duel that avoids a bloody battle and makes peace between enemies.

What he’ll do next, I have no idea.

But I can hardly wait to find out!

Not bad for a walk-on character.

As I try to prepare myself to write another book, when my Lord makes a new story available to me, I re-read the previous books in my Bell Mountain series. I’m now more than halfway through Book No. 6, The Palace.

Two of my favorite scenes are in here: King Ryons’ pursuit of the White Doe, which leads him into an encounter with the ancient kings of Obann, and the Battle of the Brickbats, in which the king’s army fights to recapture Silvertown from the Heathen–a battle whose outcome is decided in a most unusual way.

I love these, and I give God the glory for the finished work. It’s like He shows me the story and I just write it down.

I’m sure the next book will surprise me. I have no idea, yet, what form it will take.

Those of you who are new to this blog, and enjoy it–well, give my books a look-see, will you? Click “Books” at the top of the page for covers, blurbs, and sample chapters.

1 Comment   |  tags: a message to my readers, a personal note, bell mountain series by lee duigon, King Ryons, The Art of Writing, the palace | posted in Book Updates

The Great Beast from ‘The Thunder King’

As long as I’m reading The Thunder King, I thought I’d treat you to this video clip from Walking With Prehistoric Beasts, featuring the mountain-sized animal that rescued Ryons from the “death dog,” aka hyaenodon.

Don’t mind them calling it “Indricotherium.” They’re always changing the name. I stick with the old name that it had when I was a boy, “Baluchitherium.” Whatever we call it, this baby was the largest land mammal that ever lived–and the one that Ryons met was the biggest of them all.

Marvel at the work of God’s hands, and rejoice in it.

The Death Dog from ‘The Thunder King’

This is the monster Ryons and Cavall encountered on their way to Obann, as told in The Thunder King, Book 3 of my Bell Mountain series. (No, it is not about Labor & Industrial Relations: that is an amazon.com error that has cost me sales!) You might want to turn down the stupid music, which adds nothing to the presentation.

I wanted to give you a video of the “knuckle-bears” seen by Jack and Ellayne at the edge of Lintum Forest, in Bell Mountain, but the only one they had on youtube was literally two seconds long.

What? You haven’t read any of these books? (He shakes his head in painted disbelief.) Well, click “Books” at the top of the page and see what you think.

My editor, Susan, wanted me to see this: first a poem, Watches of the Night, and then a song, Jesus, Draw Me Nearer, performed by Keith and Kristin Getty.

It’s beautiful, and full of echoes of the Book of Psalms. But to Susan it also brought to mind a character in my Bell Mountain books–Ryons, the slave boy who is rescued from human sacrifice to become, by God’s grace, the King of Obann.

Ryons doesn’t want to be a king. What does he know about such things? He has hardly had a proper childhood. He hates sending men who love him into battle, and they might not return. He’s terrified of some of the things he has to do, some of the places he has to go. But what he learns is faith and obedience, and going on when you’re too scared to go, and following God’s angel when you don’t know where he’s taking you.

I am very humbly glad that anything I could write might be linked to such beautiful and prayerful music as this.

But I tell you right up front, it wasn’t any literary genius of mine, but only writing what God gave me. To Him be the glory!

‘The Temple’ Now Available in Kindle 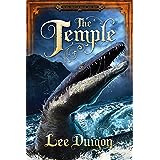 Wahoo! We did it! The Temple, No. 8 in my Bell Mountain Series, has gone on sale in time for Christmas.

So far it’s only in Kindle, but it won’t be long before the paperback is ready.

Meanwhile, this is brand-new, hot off the press–and it needs people to read it and review it. Who will be the first?

Come on–doncha want to find out what happens when King Ryons’ little army gets to the Thunder King’s huge and terrible fortress at Kara Karram? That is, if they get there at all. But you can read the full blurb when you click “Books.” And dig that cover by Kirk DuoPonce!

The Largest Land Mammal Ever

From the BBC series, “Walking With Beasts”

Hi! Mr. Nature here, with the biggest, hugest land mammal ever to live–Baluchitherium. It’s also known as Indricotherium or Paraceratherium, but I’m sticking with the old name as I first discovered it in Roy Chapman Andrews’ books.

Anyhow, this baby is a whopper. The males were 18 feet high at the shoulder. This animal was a member of the rhinoceros family. So where’s the horn? You ain’t gonna tell me a Baluchitherium needs a horn, are you?

This is the great beast that King Ryons rode to the rescue of the city in Lee Duigon’s immortal classic, The Thunder King. Uh, wait a minute… that’s me. And it’s bad form to brag. Sorry! I seem to get carried away whenever I think about Baluchitheres.

No one has ever found a trace of any mammal bigger than this one, except for whales and they don’t count because they don’t live on the land. Baluchitherium was big enough to be a dinosaur. Big enough to squash your car like a bug.

Behold the works of the Lord, what wonders flow from His hands! Bob Bakker, the famous dinosaur scientist who, more than anyone else, convinced us that dinosaurs were active, warm-blooded creatures and not overgrown stupid mountains of flesh that had to float around in swamps, once told me it was one of his greatest pleasures to contemplate the joy and pleasure God receives from His creation.

There are still some scientists with their heads screwed on straight.