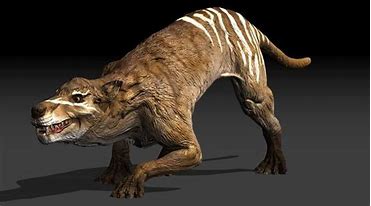 You need a place to hide, if you’re gonna see this.

This is the creature King Ryons and Cavall encountered on the plains in The Thunder King (No. 3 in the Bell Mountain series). No one had ever seen one before, and lived to tell about it. Ryons called it the Death Dog.

The video is from Tim Haines’ TV special, Walking With Prehistoric Beasts. He re-created the extinct Hyaenodon as a super-predator, and inspired this scene in my book.

For more information on all the books in the series, just go to the home page and click “Books.” 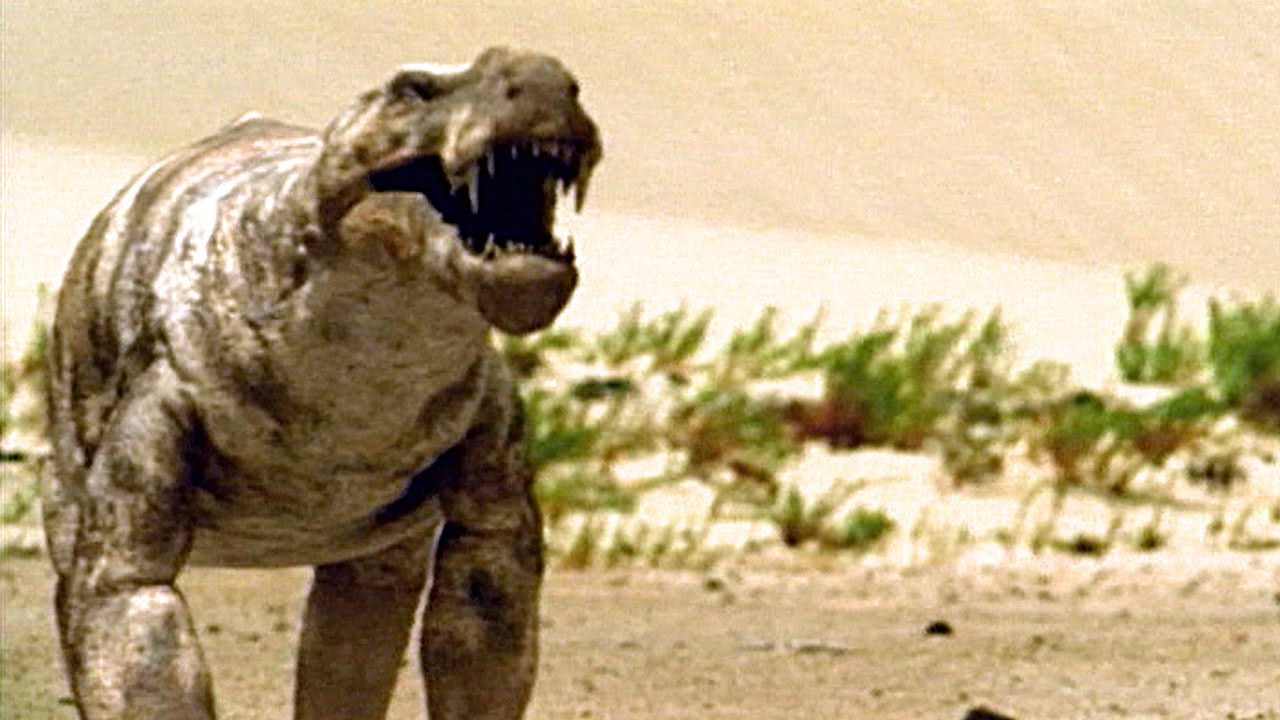 Thanks to the special effects magic of Tim Haines, we can see what happens when an oversized Gorgonopsian from the Triassic period… decides to break into a grammar school and eat people.

(Technical note: They were ugly critters, but they were nowhere near that big.)

This is only slightly worse than stuff that goes on in public schools every single day. “Gender spectrum,” anyone? We can’t do anything about disasters involving imaginary prehistoric animals.

But we can and by all means should pull children out of schools run by Far Left Crazy teachers’ unions.

Having just plowed my way through another Newswithviews column, I felt an urge to celebrate.

The prehistoric mammals in this video–you may want to turn down the appalling background music; I don’t know what they were thinking–are the work of Tim Haines, most of them appearing in his wonderful Walking With Beasts.

And most of them have turned up in my Bell Mountain books, too! If you’ve read the books, have a little fun by seeing how many of these critters you can remember from the books.

And I’m off for a bike ride!

For no reason at all, everything here is working again. Thank you, Lord!

Okay–yesterday there was nothing green on any of the trees; and today there is, some leaves have budded. Spring is definitely here. And how do they do that without anyone noticing until afterward?

In a matter of weeks it’ll be time to start writing again, back to Obann to try to clean up the mess I left at the end of His Mercy Endureth Forever. I haven’t got the seed of the story yet: I have to wait on the Lord to give it to me. A nerve-wracking procedure sometimes, but it’s gotten me through twelve books.

Meanwhile, dear readers, finally I have some video of chalicotheres, the “knuckle-bears” that live on the edge of Lintum Forest. It comes from the BBC and Tim Haines’ “Walking with Beasts,” a source of inspiration to me despite its bent for Darwinian fairy tales. What can I say? The beasts are cool!

The video includes a shocking cameo appearance by a hyaenodon, aka the “death dog” that would’ve gulped down both Ryons and Cavall if he hadn’t been interrupted by–but I don’t want to spoil the story.

There may not be many more nice days where these past two came from, so I really buckled down to try to finish Bell Mountain No. 11, The Temptation, before the cold weather set in. Scribble, scribble, hour by hour–and now it’s finished. I think.

The climax of the story, this time, wasn’t a big surprise for me: events pretty much dictated it. But for artistic effect, I think it’s all I could have hoped for. I say “I think” because I won’t really know until I get it all typed up and my wife and my editor can read it. They’ll tell me if I’ve hit the target which God gave me.

Meanwhile, folks, enjoy this Walking With Beasts trailer, featuring Tim Haines’ speculative re-creations of assorted prehistoric mammals. Some of these critters are featured in my books. I find God’s handiwork a constant source of inspiration.

In 1923 a member of Roy Chapman Andrews’ expedition to the Gobi Desert found a yard-long skull that scientists thought belonged to the largest land-dwelling carnivorous mammal ever–Andrewsarchus, named for RCA himself. Since then, no other Andrewsarchus fossils have been found.

I’ve seen this skull in the America Museum of Natural History. It’s a whopper. The muscle attachments are simply huge, indicating a bite of tremendous power. The teeth do look like a carnivore’s teeth, but they also look kind of dull and worn. Based on comparisons to fossils that looked similar, paleontologists reconstructed this awesome beast that had little hooves instead of claws and must have weighed upwards of a ton.

But, despite the wonderful special effects wizardry of Tim Haines, it’s all just speculation. Well, when you see that skull, you can’t help speculating.

I’ve got to work this critter into one of my books, somewhere along the line. Maybe it could eat a villain.

As I type up my latest chapter set of The Temptation, King Ryons reminisces (if a boy so young can be said to reminisce) his encounter with a great beast bigger than anything else that ever walked the earth. I modeled this creature on the prehistoric giant in this video–Baluchitherium. Yeah, they call it “Indricotherium” now, but I don’t. The clip comes from Tim Haines’ Walking With Prehistoric Beasts, and it’s the closest we can come to seeing what King Ryons saw.

Those little Hyaenodons who want to eat the new-born calf–they were, in fact, almost as big as a rhinoceros. Ryons and Cavall met one of them, too. Ask him about it when you see him!

All of this fun stuff is in my Bell Mountain books; so if you haven’t read ’em yet… But this is not a commercial.

A Present for ‘Bell Mountain’ Readers

I love this video! Most if it’s taken from Tim Haines’ Walking with Prehistoric Beasts, and a lot of the animals in it have already appeared in my Bell Mountain books. If you’ve read them all, you’ll recognize quite a few of them–the mammoths that stampeded through Market City, the giant birds that stalk the plains around Lintum Forest, the big but inoffensive knuckle-bears, the Thunder King’s pet saber-toothed cat, the death-dog that almost made a meal of Ryons and Cavall: and of course the great beast that carried the boy king to his city.

Anyhow, except for what our own imaginations may provide, this is about as close as you can come to seeing these critters in the flesh. Enjoy it! And have a happy Labor Day.