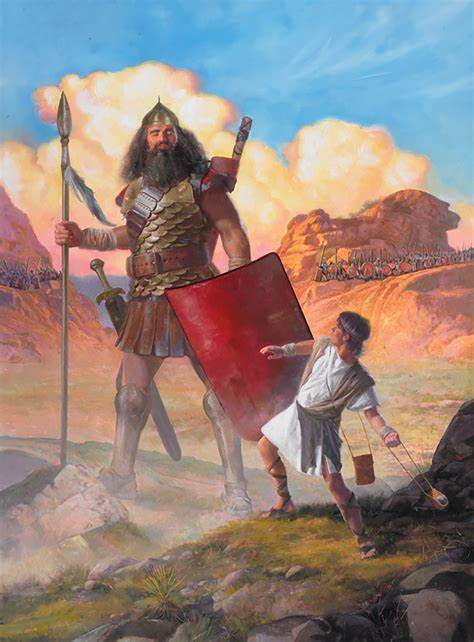 This is a stand-up-and-cheer piece by Andrea Schwartz, published by Chalcedon earlier this month.

Are you tired of pompous secular fat-heads rubbing our faces in it, and daring Christians to do anything about it? They’re the Philistines, amply equipped with Goliaths.

But our best move, Andrea says, is to “equip self-governing Christians to stand up to the despotic bullies of our day.” Not to spoil the article for you, but I just can’t resist quoting her here.

“You come against us with laws and oppressive mandates to silence and marginalize us, but we come against you in the name of the LORD almighty…”

These changes I made three years ago brought me increased readership. Not so much, the past two days; but the overall trend has been upward.

But the point is, we really do need to buck each other up and not be cast down by the evils of this present age–which, it must be admitted, are bizarre and spectacular. People have always had to deal with robbers; but our robbers today want to rob us of our souls.

God’s watching you, Goliath. Brag while you can: the stone is prepared in the sling.

Was Goliath For Real?

If we believe the Bible, then the question doesn’t even need to be addressed: of course he was for real. But there are other questions we can ask, whose answers can further illuminate the Bible for us.

Pictured above is a set of Mycenean body armor from Greece, circa 1200 B.C.: this and others like it can be seen in museums. Goliath probably had similar equipment–only his would have been new, well cared-for, and would have shone brightly–one might easily say alarmingly–with reflected sunlight.

Was Goliath a giant? Earlier Biblical texts, such as the Dead Sea scrolls, give his height as “four cubits and a span,” or about six feet nine inches. The NBA is full of guys that tall or taller; but back in the Bronze Age, six-foot-nine would have been much taller than the average full-grown man. Our King James Bible says Goliath was “six cubits and a span,” or nine feet nine inches tall: but that comes from the later Masoretic Texts and may be a scribal error.

Either way, Goliath was probably by far the biggest man in either army; and the armor he wore would have made him look even bigger. Ancient armor had two purposes, not just one: to protect the wearer, and to intimidate his foes. Goliath in new armor would have intimidated most people. Indeed, he intimidated everyone but David.

There’s a lot that we don’t know about the Philistines, including where they originally came from. Their artifacts suggest the islands of the Aegean Sea, or Crete, or the southeastern coast of Asia Minor. The ancient Egyptians called them “Peleset,” one of the Sea Peoples blamed for wrecking Mediterranean civilizations at the end of the Late Bronze Age. We don’t know what the Philistines called themselves.

The Greeks of the Mycenean civilization, the ones who fought the Trojan War, had a custom of settling matters between armies by single combat between each army’s chosen champion: Menelaus vs. Paris, Ajax vs. Hector, in The Iliad (in which neither of those two combats was allowed to go to a finish). Goliath challenges Israel’s army to send out a champion to fight him. His procedure is the same as what we see in Homer–and suggestive of authenticity.

When David killed Goliath, the Philistines panicked and fled. The strictest rules of Bronze Age military etiquette–which were observed by virtually no one–called for the Philistine army to leave off its operations and peacefully retire. But because they ran, the Israelites chased them back to Philistia. We doubt the Greeks would have sailed home from Troy if Paris had succeeded in killing Menelaus… although the rules said they should have.

The Bible provides us with many glimpses into long-lost epochs of history, many of which wind up being further illustrated by archaeological discoveries.

There is nothing in the story of David and Goliath to prevent a reasonable person from believing it.

They Came for This Pastor’s Sermons

A Georgia pastor is suing the state for religious discrimination, after he was fired from his government position when other creatures in the government reviewed his sermons and discovered the pastor agreed with God’s word that homosexual acting-out is a sin ( http://www.foxnews.com/opinion/2016/10/26/state-georgia-demands-pastor-turn-over-sermons.html ).

Since he’s sued them, now the state wants all his sermons and all his sermon notes, going back to when he was 18 years old. Having learned from his earlier experience, the pastor has refused to comply.

Dr. Eric Walsh, a 7th Day Adventist pastor, was hired as a district health director by the Georgia Dept. of Public Health. When the hiring committee asked for copies of his sermons, the pastor complied: obviously a mistake, because two days after the committee reviewed them, they fired him.

The current government “request” for all his sermons is tantamount to a subpoena, Fox News has reported.

No law has been enacted, declaring that adherence to Biblical views on sexual morality disqualifies you, forever, from holding any kind of public service post. Nevertheless, complaints by organized sodomy have the force of law, these days.

Those who believe we can just keep on letting liberals run the country, until someday the righteous candidate comes along, whom we can vote for with a clear conscience, please consider the news report above.

I don’t see any virtue in handing over the country to the ungodly and the wicked. To our great shame, we have already done so, to a degree–but not yet to the last degree. Nor do I see any virtue in courting persecution by empowering Christ’s enemies, when we still have the ability, albeit fading fast, to deny them supreme power in the land, and ownership of all our public institutions.

As I see it, God entrusted us with a country that He has singularly blessed; and rather than be good stewards of it, we have permitted it to be stolen out of our hands.

Is there any doubt that the power establishment in America is out to disable Christians in America once and for all? Toward no other religion do they show such animosity.

When David first saw Goliath, he said, “[W]ho is this uncircumcised Philistine, that he should defy the armies of the living God?” (I Samuel 17:26)

Isn’t it about time we stopped knuckling under to the Philistines?

Encore, ‘Soldiers of the Lion’

By popular demand, one more time–Chuck Girard and Soldiers of the Lion.

There are Christians who just cringe all over at the military metaphor, never mind the New Testament resorts to it again and again.

This song reminds me of one of my favorite lines in all the Bible, spoken by David:

“Who is this uncircumcised Philistine, that he should defy the armies of the living God?” (I Samuel 17:26)

It is a question we can still ask today; and you can come up with as many answers as I can.