Here it is, only halfway through the morning, and I’ve already learned two new things!

One. There’s no such thing as organized pedophilia, or pedophile rings. Why, that’s just a cwazy wepublican conspiracy theory! And to say that President Trump is an intelligent man who’s trying to stop worldwide sex trafficking–well, that’s just crazy, too. Dammit! The social media shoulda started censoring all this stuff years ago, before it got so big. Maybe they were too busy trying to stamp out Climbit Change Denial.

Two. There is no “liberal fascism” anywhere, and certainly, certainly not in college! Our universities are temples of free speech. (Good grief–there are people who actually believe that?) They never, never, never punish students for taking a dissenting view of anything! And so what if some 90% of the teaching staff is left-wing? So is all the rest of America! Really! People just aren’t conservatives! We has done “a” Grate thing hear “at” The Stoodint Soviet tooday!!!

We had a spacial lexture Today “in” Nothing Studies and boy was “it” Grate!!! our Prefesser she maid “This” Grate Thing abote how to “Tern” thiss hear no-good stinkin “contry” arownd!!!!!

And aslo wee has got to let Out “of” Jale evry Boddy whoo “is” in thare Awlreddy,, let themb All Out!!! becose thay was ownly In thare becose Of Raceism!!!!!!!!!! So let themb Out “and” givve themb Lots Of Dollers witch we can taik from Wite Raceist thay woont knead it ware thay’re Going!!!! 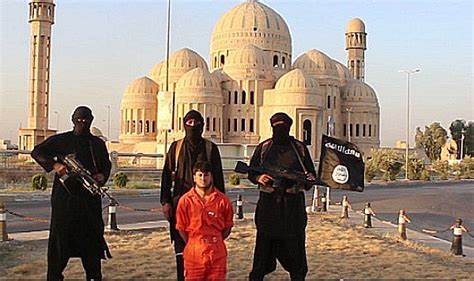 Why does a “Christian” university support this?

We really have to be off our chumps, to keep on founding looniversities that oppose themselves to everything our country stands for. Like for instance:

This Just In: University Punishes Student for Criticizing ISIS, Rioters

Texas “Christian” (that’s a laugh!) University threw the book at a student because he made disparaging remarks about bloodthirsty savages. I’d like to know where they get the authority to punish anyone. Hey, Stalinist jerks! If you don’t want the kid around anymore, give him back his tuition money and send him home.

Nor can I explain why the student allowed himself to be “punished” by a gang of little tinpot tyrants.

For the good of America, defund the universities. Now.

You should closely examine this quote. These are the words of Ayanna Pressley, Democrat (of course) from Massachusetts–one of the four Far Left Crazies who have somehow managed to seize the steering wheel of the Democrat Party.

Now, Democrats in the House of Representatives do say the darnedest things. Think of Rep. Hank Johnson wondering if the island of Guam would “tip over and capsize” if any more Marines were stationed on it. But Pressley’s quote is miles worse.

She is saying that you are defined by your physical characteristics, such as skin color, and everyone who has that characteristic had also better have exactly the same beliefs. She and her fellow loonies on “The Squad”–Alexandria Ocasio-Cortez, Ilhan Omar, and Rashida Tlaib–are self-anointed “women of color” and anyone who disagrees with them about anything, even fellow Democrats, is a Racist.

So if you’re “black,” you’ve got to think black. How do you do that? How do you find out what’s the official Black People’s Position that you’d better conform to or else? Who gets to say what that position is? (You can probably guess the answer to that one.)

Of course, this is just boilerplate Demo-dreck that’s been fermenting for a long time and has finally burst the bottle. This is what always was behind the mask.

I realize there are millions of people who will vote Democrat even if they strongly disagree with everything the Democrat candidate stands for, simply because they–and probably their mothers and fathers before them–have always voted Democrat and always will. I find that very hard to understand, but I know it’s a reality. No matter how far off the deep end the Party goes, these millions of unthinking voters will go with them.

And that’s how we could get open borders, more transgender stuff, a 70% tax rate, jail time for Climbit Change Denial, and all the rest of the Democrat deluxe fun-pack.

America will not be safe until the voters put the Democrat Party permanently out of business. The Democrat Party is an existential threat to the survival of our republic and must be utterly defeated. 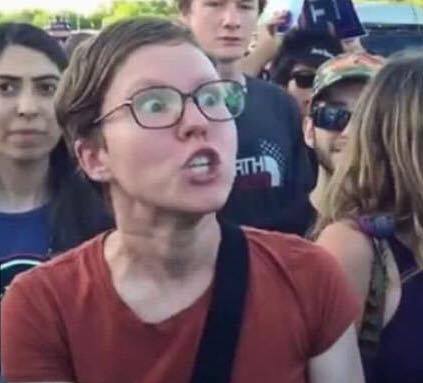 So now it turns out the leftids not only kicked the president’s press secretary out of the restaurant, but the crazed owner followed Ms. Sanders’ in-laws to another restaurant and “demonstrated” against them there.

Meanwhile, “a senior DHS official” found a “burnt and decapitated animal” left on his front porch one morning (https://fellowshipoftheminds.com/2018/06/25/more-democrat-psychopathy-red-hen-owner-pursued-sanders-in-laws-to-another-restaurant-burnt-decapitated-animal-on-dhs-employees-front-porch/).

According to the crazed owner, the restaurant’s crazed employees demanded that Ms. Sanders be kicked out because she works for President Trump, who not only is an evil bad guy for trying to enforce our country’s immigration laws, but they were also enraged by his policy of “no transgenders in the military.”

They say they’re unbearably afflicted by the law that separates illegal aliens from their children when they’re caught–although we didn’t hear a peep out of any of ’em, the whole time their so-called president was in office, for eight years.

They care so much for children. I guess that’s why they kill them in the womb and auction off the body parts. Hey, libs–that’s how you care for children?

There might have been young children in the home with the senior DHS official. Some little girl might have opened the door to find a “burnt and decapitated animal” on the porch.

Not one elected Democrat, no, not one, has so much as raised an eyebrow over these quasi-terrorist shenanigans–let alone disavowed it, or condemned it. Not one. We can only conclude that either they tacitly consent to it, or else they, themselves, are by now afraid of the foaming-at-the-mouth lunatics that they’ve stirred up, and don’t dare say a word against them. Or both, maybe.

This is all supposed to win us over for the Big Blue Wave, come November.

The single best thing that can happen to America is for the Democrat Party to be put out of business forever. 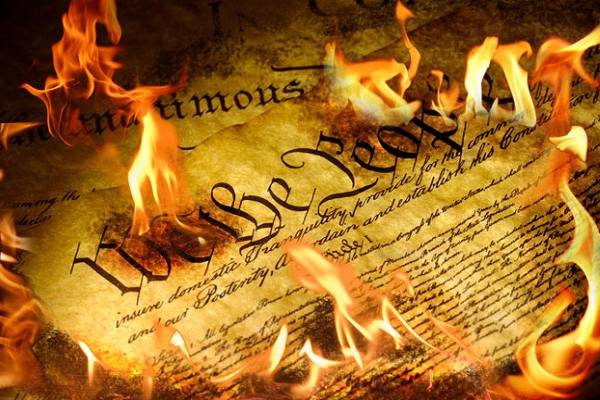 Man thay has done a Grate thing in Cannader and gess wHat, we doing itt hear at Collidge!! too.

See thay got this Sumer Jobbs thing in Cannader for stodents, only Now yiu cant Get “one” Unlest yiu sine “this hear Staytmint that it says Yiu suport the Rihght to A Bortion! that whay none “Of” them no-good Rihght “to” Lyfers thay cant get no sumer jobbs!!!

So laset Nihghht our Stodent Soviet thay votted to not let any Boddy “eet” In the Campas Caffateeria unlest yiu sine a Staytmint it sayes Yiu suport A Bortion and aslo yiu has got “to” say yiu Suport Trans Gender Rihghts and aslo Gay Marridge and aslo Hillery she shud Be Pressadint!!!! Thenn yiu Get “a” spatial Card it says yiu O-K to eet in “The” caffateeria! yiu got to show The Card ohtherweyes you dont get nothing “to eet!! And thagt whay wee can Keep Out any Racist Biggits whoo thay are Not InClusieve!!!

Thiss hear Actshin by “the” Stodent Soviet it puts “our” Collidge rihght thare in The four-front of Progrestive Human Rihghts! and any Boddy thay dont Like it wel Thay “can” jist do whith-out No Foood!!!

The Texas State student newspaper, The University Star, has “apologized” for an, er, “editorial” proclaiming that “White death will mean liberation for all” and telling white people, “Your DNA is an abomination” because “You shouldn’t exist” (https://fellowshipoftheminds.com/2017/12/01/texas-university-newspaper-publishes-anti-white-your-dna-is-an-abomination-column/).

But hey, as long as they’ve apologized…

This screed was written by a Texas State senior majoring in “philosophy.” I used to have respect for that subject, but obviously it isn’t worthy of any.

Y’know, I thought colleges and universities were dead set against “hate,” they’ll kick you out for being a “hater,” or force you into “sensitivity training” until you achieve Diversity by thinking like everybody else–it appears I was wrong.

De-fund the universities now. Before they can start the kind of fire they’ve been playing with.

Boy am i exited!!! The Collidge it has got us a Buss so we Can “alll go” to the Auntyfa Ryat in the citty!! Somboddy thay sayed it was Gorge Sauros he payed “For” the Buss he is a grate man! We has his pitchure up in the dorms allong Whith pitchures of Chay and Mow and Marks and Kimb Jong Unn and other Grate Champeens of ThePeple!!!!

I culd not “get” a black massk To fit “over” my hedd on acount Of “my” Moth Antenners it bends them funny whays and That it reely herts!! But a bigg Paper Bag “it” fitts jist fine so i wil ware That once i figgers Out how to cut Eye Holes in it! and al Our Prefessers thay is giving Us Exter Creddit for being In “a” Ryat!!! that is goood becose my grades thay hasnt been so “hot” latele! Gender Studdies 202 it sure is hard!!!

We are “not Saposed” to killl noboddy but if Some Trumper Wite Stupremassist Biggit thay gets “In” our whay whach out!!! but it is OK to like sort of Bop somboddy “on The” hedd if thay Are “Not” on our Syde!

Wel i better “get” this hear Paper Bag reddy It is not so eesy as yiu think to cut out Eye Holes and i alreddy has cutt my Fingers “threee” times!