We think we’ve got troubles? King Alfred, twelve hundred years ago–he had troubles! Heathen poured across the sea and swamped his kingdom, they’d have killed him if they’d caught him, he had to hide out in a peasant’s shack in the middle of a swamp…

And he wrote this: King Alfred’s War Song. “For the Lord is our defense, Jesu defend us!” I don’t know about you, but I need a belt of that just now.

Someday the heathen will either be converted or destroyed. By their own hand, most likely.

Be strong in the Lord, and in the power of His might. (Ephesians 6) 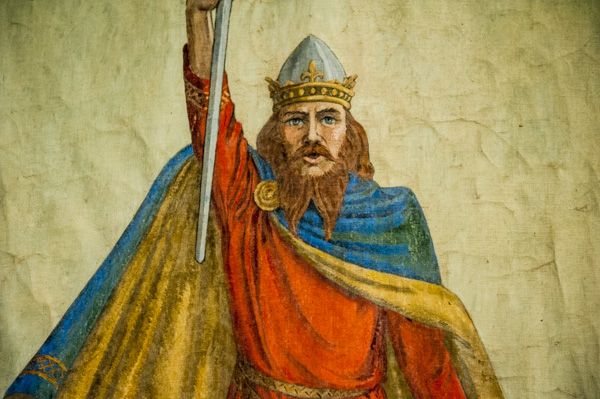 King Alfred the Great: No, we won’t change our religious beliefs.

Libs are still marveling that they could have lost the 2016 election, after their candidate so patiently explained to us rubes how we’ve got to change our religious beliefs.

Now please, just because this was originally posted in 2015, don’t go thinking they’ve retreated an inch from this position. Now that they can’t use the Supreme Court to wage their culture war on Christianity, they’ll double down everywhere else.

Stand firm: for the Lord is our defense (as King Alfred said), Jesu defend us.

A Natural Marvel? The Blowing Stone

The “Blowing Stone” of Kingston Lisle, Oxfordshire, England, is a rather large boulder with holes in it. One of the holes goes all the way through. And if you blow on it, as on a trumpet, the resulting call can be heard for miles around.

The hole through the stone is apparently due to natural causes. I don’t know how anyone would have ever thought, “I wonder what would happen if I blew on this.” Maybe a freak twist of the wind made it sound, and someone was there to observe it. There’s a legend that whoever blew on the stone so that it could be heard from a famous hilltop, some miles away, would be the next king of England. There’s also a legend that says King Alfred blew on the stone to summon his warriors to fight the invading Danes.

It’s near the White Horse of Uffington, but really, Mr. Folklore will have to field that one, it’s way beyond Mr. Nature’s scope.

We often talk about the music made by nature, with God as its conductor; but this is the first I’ve heard of a natural musical instrument.

Unless you want to count the “ringing rocks.” But that’s another story.

Here I am again, writing about that consarned election. It just won’t go away.

I’ve been hearing a lot of despair from various people, including some of us here on this blog: Trump and Hillary are the devil and the deep blue sea, it doesn’t matter which one gets in, they’re both just terrible.

Let us grant, for the sake of discussion, that’s true: Trump really is every bit as bad. I don’t believe that, allegations by the nooze media don’t impress me, but never mind. What matters is that either he or Ol’ Careless will be our next president.

Our friend Weavingword asks how we, the American people, ever reached this point. Well, it took a long time, didn’t it? It took a great deal of hard labor from a great many wicked persons over several generations to push us into this kettle of fish. And the point of that is, it’s going to take a lot more than one election to undo it.

The ultimate goal must be the re-Christianization of America, and the total dis-empowerment of our current secular humanist, fanatically statist ruling class. That can’t be accomplished unless many millions of people in America make some major changes in their hearts and minds. Again, these things can’t be done quickly.

We have to start somewhere. And given that the entire statist ruling class is rock-solid against Trump and for Hillary, the obvious starting-point, for practical purposes, is to keep Hillary out of the White House.

And then, if Trump turns on us, the people who elected him, why, we’ll turn on him. And then who’s he gonna call? Paul Ryan?

Elections are only a small, albeit important, piece of what we’ve got to do. But each election gives us another opportunity to chop away at the power of our perverse ruling class–not just the politicians, but also the noozies, the courts, the schools and colleges, Hollywood, the various sets of “activists”–the whole shootin’ match.

And we must constantly, daily, seek God’s help. And if He wants to intervene before the struggle has gone on for very long, you won’t catch me complaining.

Remember: King Alfred wrote, “For the Lord is our defense, Jesu defend us.” But he did have to come out of the swamps and fight the battles that God gave him.