Please pardon the lurid headline. I couldn’t resist it.

Thursday was bad and Friday was worse–one damn thing after another, all day long. By suppertime Patty and I were blitzed.

We need to relax this weekend; and a thing we both find relaxing is old-fashioned black-and-white horror movies. Patty nominated Carnival of Souls. And y’know what? That movie’s just the ticket. The set alone–a deserted boardwalk/carnival out in the middle of nowhere–is worth your time. I wonder what it would really be like to walk there, all alone.  Ooooh! Scary, boys and girls!

Again I’ve reached the point where the nooze starts to look like it’s all the same story, and not one that you’d want to hear. Work hard, pray harder, sing louder. It’ll take God’s grace to get us out of this. I won’t ease up on the prayers until I see a lot of prominent Democrats taking off for countries with which we don’t have extradition treaties.

Hello out there! What are some of your favorite fright flicks? Maybe we’ll watch one of them.

(This is seven and a half minutes long… but sweet.)

What do you do with a baby penguin that has a phobia for water? I mean, that won’t work!

Well, here are a few people who go to a lot of trouble for this one little penguin; and they’re able to lead her out of her phobia. I consider that proof that, for all its faults, the human race is not entirely devoid of grace.

Which is the gift of God.

This is one of those things that brings in hope.

This poor stray kitten had no chance. But watch what happens when people take him in and go all-out to save him. Mercy and grace. And a glimpse of God’s goodness.

A happy ending, after all.

(I’ve posted another hymn because I think we need it–I Love to Tell the Story, sung by Alan Jackson.)

As we try to get Peep to eat, to build her strength, we are praying hard and I know that some of you are praying for us, too. Heal our little girls, Lord, and it’ll heal our spirits. (Meanwhile, Robbie is doing very well: answered prayers. Thank you, Lord. And we thank our friends and fellow servants with you.)

St. James wrote, “The effectual prayer of a righteous man availeth much” (James 5:16). I don’t know if I make the grade for righteous: that judgment is God’s. But I have to pray as if I were righteous. If we have faith in Jesus Christ, His righteousness is imputed to us.

But look at our country, lately. Look at this world. Do you like what you see? War, corruption, selling out to China, violent crime boiling over in our cities, “education” devoted to fomenting racial hatred and pushing “transgender” on our children–but who has space to list it all?

There’s such an awful lot to pray for! And to pray against.

Turn to God, and He will turn to us. Amen.

We continue to do our best to give exposure to the work of our fellow Christian bloggers and, hopefully, to add to their readership. Big Tech is whittling down our audience, so we have to help each other.

Today’s essay on the Grace of God comes from our friend and colleague SlimJim from his blog, Veritas Domain.

Here we learn that “grace” is possessed and employed by all three Persons of the Trinity, Father, Son, and Holy Spirit–as clearly taught throughout the Bible; and that “grace” is best understood as “unmerited favor,” God’s free gift to us. We don’t deserve it, but we have it!

It’s a long lesson, but full of spiritual nourishment.

From the Christian blog, unashamedofjesus.org

Acts 8 tells of one Simon the Sorcerer, who had convinced the people of his town that he was “some great one.” When he saw the apostles lay hands on his neighbors and baptize them with the Holy Spirit, he tried to buy the ability to do this himself.

And St. Peter said, “Thy money perish with thee.”

We have more than our share of false prophets–and worse–today, many of whom seem to think that the spiritual gifts of God are up for sale. They have their followings.

But the gifts of God are not for sale! They are given by God’s grace alone; they are not merchandise.

I’ve always wondered what happened with the rest of Simon’s life, after he asked Peter to pray for him. Did he repent and sin no more? Or did he just set up shop somewhere else?

I don’t suppose I’ll ever get used to hearing people assert that sexual gratification, in whatever form it takes, is the supreme virtue. I hear it a lot, but can’t get used to it.

This is the legacy of my generation, the Baby Boomers, the rock-heads who made the Sixties rock. This is what we’ve left to mark our passing: a whole collection of “rights” to abortion, public lewdness, sodomy, sexual mutilation, adultery, “transgender” whatever–with quite a lot of drug use thrown in. This is what we picked up in college in 1969. We brought it out with us, and now the world’s rotten with it.

It doesn’t stop there, although “there” is surely bad enough. As Our Lord Jesus Christ warned us, if we remain faithful to Him, the world will hate us for His sake. And it does. That, too, is hard to get used to–being hated and reviled for remaining true to moral laws and standards handed down by God and unchanged for thousands of years. But many of my generation have learned to cast away, in an instant, anything they might have been raised to believe in. Most of us want to be cool. We crave the world’s approval. This, too, we learned in school and college, and from television.

So we pray to God to intervene in history, and save us, and revive us, once again, and to make us strong to endure throughout this evil age. This fallen world has passed through worse. The two world wars were worse. By God’s grace, and according to Christ’s promise, His church is still here.

May He find us at our posts when He returns. 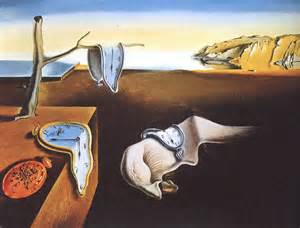 “The Persistence of Memory” by Salvador Dali

Salvador Dali painted a famous picture of a couple of melting clocks: The Persistence of Memory. I’m not here to tell you what that’s about (as if I knew). No–this post is about the persistence of leftism.

We live now amidst a God-given opportunity to liberate our country from a secular utopian ideology that looks to an all-powerful government as the answer to all the world’s problems. We can defeat it; we can drive it into the political wilderness; but it will never really go away.

As Christians we know that what we really need is the regeneration of our own hearts from within, accomplished by the sovereign grace of God. No matter what policies any government pursues, the fact remains that we are all born sinners.

For leftists, salvation is accomplished from the outside in, by external measures, usually coercive, even violent, imposed from the top down by persons who have power. Hence the speech codes, re-education camps, forced labor camps, collectives, and the piles of dead bodies. For them the problem is never sin, never the darkness in the soul, but always some kind of shortcoming or inaccuracy in this or that public institution–which can always be remedied by whatever action by the government is deemed necessary.

This mind-set arises from the Original Sin itself: the delusion that we mortals can be gods in our own right, determining good and evil for ourselves. This was the lie told by the serpent, the lie that got Adam and Eve kicked out of the Garden of Eden. It is a lie that dwells in our flesh, and only the love of God in Jesus Christ can save us from it.

We have to remember this–especially whenever we are tempted to think like leftists and convince ourselves, “Get the politics right, and the human heart will follow. Just draw up and enforce the right public policy, and bob’s your uncle!”

We’ll never have anything to show for that but a bunch of woozy clocks that don’t run anymore.

President *Batteries Not Included just couldn’t wait to give up America’s practical control of the Internet; and on Sept. 30, that’s exactly what he did, when he permitted the agreement to expire between the United States and the non-profit organization that administers the Internet, ICANN (Internet Corporation for Assigned Names and Numbers).

ICANN is in limbo, but won’t be for long: the United Nations Dictators Club is champing at the bit to take it over (https://www.technocracy.news/index.php/2016/10/27/technocracy-the-real-reason-why-the-un-wants-control-over-the-internet/ ).

Why would the UN want to take over the Internet?

Because statist secular humanists believe that “a world run by science and technology is better than any other form of governance.”

Professing themselves to be wise, they become fools.

And your idea is so worn-out, so long discredited, so stale, so old! It was past its sell-by date when Plato trotted it out for his Republic: government by the experts, the wise, the smartest people in the world, rule by philosopher-kings. And then you get the philosopher-king and its turns out to be just another dunderhead or psychopath–like Nero, Stalin, Mao Tse-tung, or the cabal of thieves hanging out at the UN these days. I mean, this was crapola when Woodrow Wilson spouted it, and it has not improved with age.

But this is where your theology always leads you, once you discard belief in Original Sin and reliance on God’s sovereign grace.

Let this be our battle cry in years to come: We have a greater King than Caesar! And all powers of the earth shall be put under Him, and He shall reign forever and ever.

[Thanks to Linda for the news tip.]

I’ve been re-reading Parables by John MacArthur, a book I’ve already reviewed here and elsewhere: and let me say again that, if you haven’t read it yet, you really ought to.

The chapter I read today examined the Parable of the Good Samaritan, and makes a powerful point: this is what God’s love is like. This is the love that we receive from God. And he quotes St. Paul, “When we were still without strength, in due time Christ died for the ungodly. For scarcely for a righteous man will one die; yet perhaps for a good man someone would even dare to die. But God demonstrates His own love toward us, in that while we were still sinners, Christ died for us” (Romans 5:6-8).

“I am saved.” We have heard that so often, and so often said it ourselves, that it has become a cliche–which means we have to try to hear it now as if we’ve never heard it before. As if the good news of the Gospel really were news to us.

This is power. This is Jesus Christ, our Savior. There is no one, no institution, no public policy, no power in the world that can give this to us: only God’s grace alone, in the person of Jesus Christ. By grace we are saved. Not by anything we do, or ever can do. Because we can’t. But God can.And has done so.

It’s something to think about… a lot.