Remember this? Self-proclaimed “conservatives” who conserve nothing, urging Christians to jettison the teachings of God’s Word…

They Cheated and Still Lost

Wow! Pennsylvania’s Secretary of State–the official who’s supposed to see that elections are fair and above board before certifying the results–has had to resign because of massive voter fraud (https://www.youtube.com/watch?v=2Td-Q_jHwK4).

It turns out that, on this secretary’s watch, thousands of illegal aliens voted in Pennsylvania’s election–laundered into the system through a “motor voter” scam. “Motor voter” was Bill Clinton’s brainchild for quickly ginning up a lot of Democrat voters who otherwise wouldn’t be eligible.

So they cheated in the last election and still couldn’t bring home Pennsylvania for Hillary.

I have yet to hear of any voter fraud which has benefited any but a Democrat candidate. In fact, I wonder if they would win any elections at all without it.

Idiot of the Year Our secret confidential sources have revealed that Attorney General Loretta Lunch–er, Lynch–has been meeting secretly with leading Senate Democrats to discuss the feasibility of having the Republican Party listed as a terrorist organization.

“If they can swing it,” said one of our sources, “they’ll have Donald Trump arrested and jailed before Election Day.”

Another source said that Supreme Court Justice Ruth Bader Ginsburg is in the process of discovering a Constitutional right to have only a Democrat for president. “This would effectively outlaw the Republican Party,” he added.

But that being the case, who then would run against Hillary Clinton?

“Attorney General Lunch–er, Lynch–thinks that in that event, American’s mainstream news media would have the right to select the opposition candidate,” said our smartest source of all, you’d be amazed if we told you who it was. “Right now, the leading candidate to run opposed to Hillary is the late Soupy Sales. Internal polling shows Hillary ahead of Soupy, 51% to 49%.”

Democrat Senators were seen to come out of the meeting with paper bags over their heads, added our source. “But I was there when they took ’em off,” he said.

‘What’s Next?’ Do You Really Want to Know? 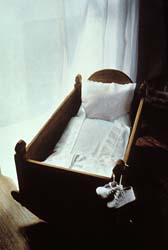 An empty cradle–welcome to humanism

One of my readers, responding to the story about the idiot college students mistaking a priest for a Klansman, has asked, “What’s next?”

I am not happy about being able to answer that.

In Japan, a country caught in a demographic death spiral because people just aren’t having babies anymore, entrepreneurs have brought to market a Virtual Reality Sex Suit, a full-body thingamajig that lets you enjoy a pitiful form of “sex” without a partner ( https://www.rt.com/viral/338662-virtual-reality-sex-suit/ ). For a mere $400, you can indulge in what I think our British friends would call high-tech wanking.

Why do I even mention something as disgusting as this?

Because it shows our modern, global, humanist civilization as having firmly placed itself on the road to extinction, and is a grim reminder that we need to pray as we’ve never prayed before–pray for repentance, for a return to sanity, for God to give us the courage to stand in front of this tidal wave and cry, “Enough!”

May the good Lord hear us.