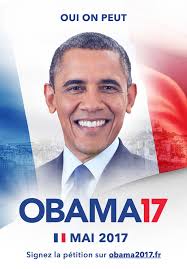 A few years ago they were having an election in France and a lot of the voters wanted to borrow Obama, now that we didn’t need him anymore. God spared them that.

Actually, I re-posted this essay because the comments by Marlene and Unknowable are so well worth reading, and instructive. But then I always get a lot out of my readers’ comments.

Would you vote for this fish?

Wowee! A newly-discovered fish species has been named after the worst president in U.S. history so far. (http://www.cnn.com/2016/09/02/politics/fish-named-after-obama/?iid=ob_homepage_deskrecommended_pool) *sigh* It can always get even worse than this, although such a thing is difficult to imagine.

Here I will exercise restraint and not resort to any of the wisecracks that have doubtless already occurred to the reader. There are an almost infinite number of them that can be employed.

I suppose they named a fish after him because they ran out of diseases.

One of the ill effects of our public education system is that people can’t recognize piffle anymore when they hear it.

Our self-righteous jidrool in the White House visited Hiroshima last week and called upon the whole world to “morally evolve” so that nuclear weapons will never again be used ( http://www.telegram.com/article/20160527/NEWS/160529209 ). He wants “a moral revolution” to match our scientific and technological revolutions.

“Evolve”–what does he mean by that? Does he mean the kind of “evolution” he had, that convinced him that homosexual pseudo-marriage is A-OK, ticketty-boo morally, and the Bible has always been dead wrong about it? Or is it Supreme Court Justice Kennedy’s “evolving standards of decency” that make the indecent decent?

Where does he suppose this “moral evolution” will come from? Islam? Socialism? More money spent on more schools, more colleges, more teacher pensions? Or will it just develop naturally–like from walking fish to dinosaur to monkey to Social Justice Warrior?

God’s word teaches us that man is fallen, cursed. That’s why we needed a Savior. If we could save ourselves, or just “evolve” into morally upright beings, there would have been no need for the Son of God to die on the cross. Jesus Christ is the source of our moral regeneration. Jesus Christ, and Christ alone, is the Person who can make us better. We are all sinners, and we sin all the time: but we are also capable of repentance, and God will not turn away a contrite heart.

God’s word promises us that someday all of Creation will be regenerated, with sin and death banished from it forever. This is accomplished not by us, but by the irresistible grace and power of God.

In the meantime, humanity as a species is the same as in the days of Noah–DNA pretty much guarantees it–and we as individuals just as much in need of salvation–and just as capable of receiving it, in Christ–as ever.

“Evolution” does not enter the picture.

But it sounds so cool when the president says it.

Ha, ha, that big dop went out somware so i got his blogg.

Im sick and tyred of al that Donnold Tromp bisness and al those ordrinary dum peple mouthin offf aginst thair leeders, they so stopid and thay dont know nothing who do thay think thay are??

Thay got al angree abuot how leeders runnin the countrie and thay got no rihgjt to be mad! Epsecialy wehn thay mouthin offf aginst Hillery and John Kery and most of al our Glurious Pressdent O’Bomma, waht nerve!

Do yiu wanta know whye these here leeders is so smart, its becose thay got us Interllecturals to tel them whats smart!!! Thay is Smart becose thay lissen to The Inteligencia, which is us hear at Collidge and the Unavarsity. Them ordrinery dum peple whye dont thay jist Shut Up and do What their Told?? Thay shuldnt even be aloud to Vote anyhow, epsecialy the ones Who got Wihte Prifflidge thay shuld not vote.

Wehn Hillery is Electred Pressidint i hop she puts Tromp in jale and al them dum peple who Voted for him it ouhgjt to  be Aginst The Law to vote aginst her becose that is onely Sexism.

if yiu wanta be even Half smart yuo must lissen to interllecturals and do watt we tel yiu.

Dig this clip from Al-Jazeera TV: Egyptian commentators beating the stuffing out of President *Batteries Not Included for his inane contention that Global Warming aka Climate Change is America’s No. 1 national security threat.

One of the commentators wonders, “Is he on drugs?” Another calls him “an affirmative action president.” And another describes him as “a man who ignores the evidence of his own eyes.”

And this was all before this weekend’s blizzard dumped 30 inches of snow on Washington, D.C.

Al-Jazeera–doing the work that the American nooze media won’t do.

The Congress shall have power to lay and collect Taxes, Duties, Imposts and Excises… (Section 8)

–Article I of the United States Constitution

When Valerie Jarrett, back in 2008, said Obama was “ready to rule,” no one realized she meant it literally.

Fresh off his stroke-of-the-pen “executive amnesty” for millions of illegal aliens, President *Batteries Not Included now contemplates a “unilateral tax hike” by means of yet another executive order ( http://townhall.com/tipsheet/conncarroll/2015/03/02/obama-very-interested-in-raising-taxes-through-executive-action-n1964629 ).

The Constitution–laughingly referred to as the supreme law of the land–gives Congress the exclusive power to raise taxes. So what does this president think he is doing?

We can shed some light on this thanks to an exclusive interview with a presidential adviser named Carbuncle, who normally appears to be nothing more than a small growth near the president’s armpit. While the president is asleep, or otherwise insensible, Carbuncle can take the form of a large insect and move about independently.

“He will tell you he only wants to raise a mere $100 billion–chicken-feed!–by closing off tax loopholes and punishing those big corporations that everybody hates,” said Carbuncle. “This is going to happen in all 57 states, and that $100 billion is only the first installment.

“The president is distressed that some vestiges of the Constitution might remain intact after his final year in office. He is also keen to establish many more vacation residences for himself in various countries of the world. That will cost lots of dollars! So far he is looking at places in Costa Rica, Dubai, Switzerland, the Maldives, and some 90 other undisclosed locations.”

How can the former community organizer get away with such blatant violations of the law?

“Easy! Simple!” answered Carbuncle. “He knows no one in America will dare to demand his impeachment, because everyone in America is terrified of being called a racist. They would rather bow down to a tyrant than run the risk of being slammed by the media. So he can do anything he wants.”

Besides which, he whispered, while suggestively waving his antennae, “He has help from a place that many Americans don’t believe in but that all are afraid of.”

For the time being, a federal judge has put the kibosh on President *Batteries Not Included’s “executive amnesty” for millions of illegal aliens. But of course, once “progressives” have an evil work in hand, they never drop it. And the headlines are full of Republican surrender monkeys who seem to think the last election didn’t count.

Let us disregard, for the sake of argument, the probably irreparable harm that would be done by trying to digest, all at once, millions of unskilled poor people who come here from a foreign country and can’t speak English. Indeed, let’s go farther–even farther than Fat-head Jeb Bush, who thinks erasing our borders will somehow “lift our spirits.” Let’s say this wholesale amnesty will be altogether a blessing: guaranteed to get our economy moving again, re-invigorate a rotting culture, refresh our social institutions, and result in each and every one of us getting a highly-paid no-show job with a big fat pension that kicks in when we turn 35.

Executive amnesty would still be wrong.

Why? Because, as the president himself has remarked many times, during lucid intervals, the Constitution simply doesn’t give a president that kind of power. He cannot exercise such power without way overstepping his bounds. He can’t do it without violating the law and threatening the continued existence of our republican form of government.

Should the chief executive of a modern, civilized country also be its chief law-breaker?

And if Congress is willing to let a president function as a king, at the expense of its own Constitutional prerogatives and sphere of authority–well, then, what does that make them?

At the moment, it seems that all that stands between America and monarchy is a single federal judge.

That, and our prayers.

There are times when I just feel swamped–so much crazy stuff going on, I can’t decide what to write about. So how about a little selection of simple observations?

Just because everybody says it’s true, doesn’t mean it’s true. The “appeal to consensus” is an invalid argument. But it’s the main support beam for Evolution, Climate Change, what have you.

But of course if the majority opinion is that some liberal scheme is wrong and totally undesirable, consensus then becomes irrelevant.

Every utopian scheme–are you listening, Humanist Manifesto fans?–is doomed to run aground on the rocks of sheer impossibility. They promise things that no one can give, and eventually succeed only in arousing a revolution of rising expectations. You can’t string people along forever.

If President *Batteries Not Included really loves this country, he has a mighty strange way of showing it.

If our current crop of leaders truly is the best a nation of 300 million can do, God help us.